Mini-me alert! Katie and Suri both looked perfect in polka dots when they stepped out for a morning meal. See all of their sweet lookalike shots for yourself!

Like mother, like daughter! Suri Cruise, 12, has always been the spitting image of her momma Katie Holmes, 39 but it’s never more obvious than when they’re wearing matching outfits. So when they stepped out in Manhattan on August 30 for breakfast in polka dot dresses, we had to do a double take! Not only were they sporting their usual matching haircuts and carrying coffee, but their flowy ‘fits were so similar. Even though Katie’s dress was black with white dots and a little longer, Suri’s white one definitely could have been purchased in the same place. They did switch up their accessory game, though! The preteen wore blue flats and a pink purse, while her mom sported brown sandals and a black bag.

This isn’t the first time that the two have twinned in public! In May, they went to the American Ballet Theater Spring gala together and both wore floral dresses that complemented each other. We don’t know what we love more — that they coordinate their outfits or that they go on mother/daughter dates like this SO often. From sitting courtside at a Knicks game to announcing Taylor Swift‘s Jingle Ball performance onstage together, they seem pretty inseparable. And even though Suri doesn’t see her Scientologist dad Tom Cruise, 56, often, she is close to her mom’s boyfriend Jamie Foxx, 50, a source close to the fam told Hollywoodlife.com EXCLUSIVELY.

“There’s a definite hole there left by Tom, and Katie does her best to fill it,” the insider said. “She’s grateful to have Jamie in her life now, he’s becoming more and more of a father figure to Suri and she’s very grateful for that.” We’re happy to hear that! 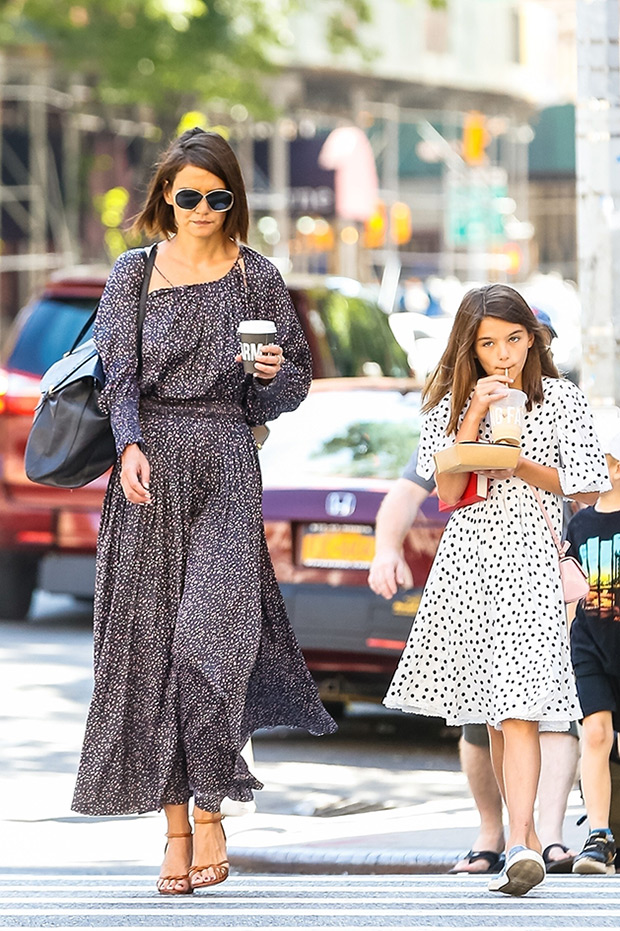 And happy to see that Katie and Suri still hang on the reg. Name a cuter mother/daughter pair, we dare you! They’re cute as can be, especially in these polka dot dresses.