Celebrities flocked to Aretha Franklin’s funeral on Aug. 31 to mourn the singing legend. Ariana Grande, Isaiah Thomas, Faith Hill, and more attended the ceremony to say their final goodbyes to the Queen of Soul.

Aretha Franklin had a massive impact on celebrities across the board — from artists to actors to athletes. For decades, her music inspired us all and lifted our spirits. It’s only fitting that the celebrities who loved her would attend her massive funeral. Among the first celebrities to arrive at her funeral service on Aug. 31 at the Greater Grace Temple in Detroit were Ariana Grande, 25, Pete Davidson, 24, Faith Hill, 50, Isaiah Thomas, 29, former President Bill Clinton, 72, former Secretary of State Hillary Clinton, 70, and Whoopi Goldberg, 62. Ariana and Pete had a nice chat with Hillary before the ceremony started.

Many celebrities are taking part in the ceremony as part of a tribute to the singing icon. Ariana and Faith will be singing during the ceremony, as well as Chaka Khan, 65, Stevie Wonder, 68, and Jennifer Hudsonb, 36. Jennifer Holliday, 57, will close the ceremony by singing during the recessional with the Aretha Franklin Celebration Choir. Other celebs will be speaking during Aretha’s funeral. Tyler Perry, 48, Cicely Tyson, 93, and former President Bill are among the stars paying tribute their beloved Aretha. 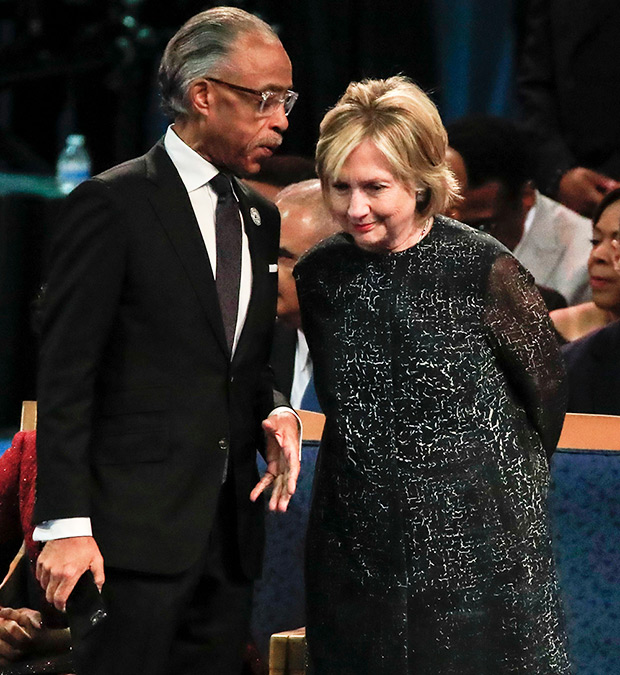 The singer’s open casket was placed at the front of the church ahead of the service. On the wall were the words, “A Celebration Fit for the Queen.” Buckingham Palace played “Respect” during the Changing of the Guard in honor of Aretha. Aretha tragically passed away on Aug. 16 in Detroit after a long battle with pancreatic cancer. She was 76 years old. She touched so many souls throughout her long and rich life, and her funeral is a testament to her everlasting legacy. Rest in peace, Aretha. You will be so missed.