Prince Harry gets handsy with wife Meghan Markle and there’s photo evidence! The Duke and Dutchess of Sussex clearly had a great time during their ‘Hamilton’ event on August 29! — See the PDA snap!

Meghan Markle, 36, and Prince Harry, 33, continue to march to the beat of their own royal drum. The newly married couple displayed some rare PDA while at London’s Victoria Palace Theatre for a gala performance of Hamilton on Wednesday, August 29. Harry placed his hand on Meghan’s waist in one candid shot, which featured the night’s performers. See the adorable photo, below!

Harry’s handsy moment is what some would call a clear breach of royal protocol, which that dictates couples cannot show affection in the form of hand-holding, kissing, or hugging in public. However, he didn’t display any of the above, that we can see. So, it looks like Harry, whose known to bend the rules a bit, acted appropriately. Royal rules order that arm-holding is about as intimate as royal couples can get while in public, especially in front of the queen.

The Duke and Duchess of Sussex were all smiles in photo ops from the event, which also featured Harry breaking out into karaoke. The event was also in support of Harry’s Sentebale charity. 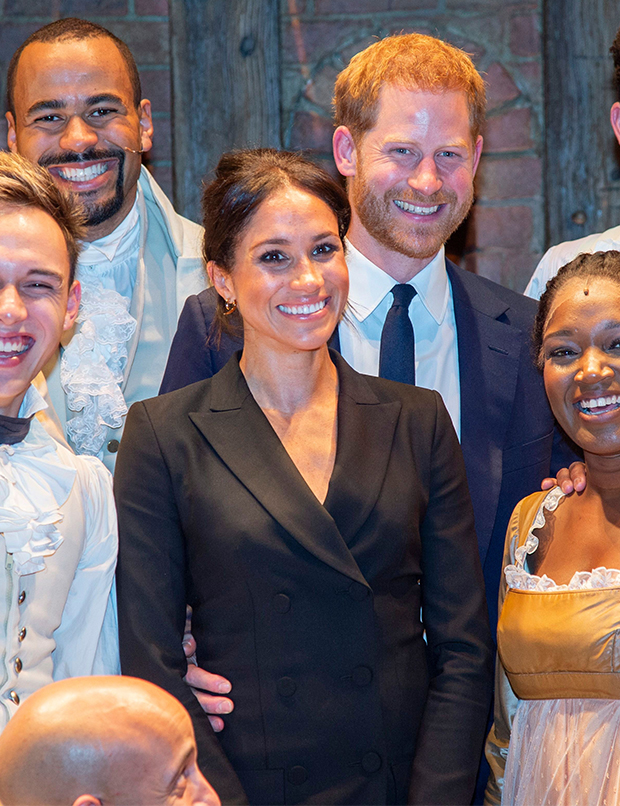 Prince Harry puts his hand on Meghan Markle’s waist at London’s Victoria Palace Theatre for a gala performance of Hamilton in support of Harry’s Sentebale charity on Wednesday, August 29.

This isn’t the first time the couple has been called out about royal protocol. The actress was previously criticized for crossing her legs at the knee, instead of the ankle, while at the Young Leaders Reception at Buckingham Palace while with Harry and Queen Elizabeth II, 92, on July 5.

At the same event, a video showed Meghan seemingly reaching for Harry’s hand, another breach of protocol, however, he quickly clapped his hands together as they walked behind the queen.