Chris Pratt and Katherine Schwarzenegger are going strong amidst Hollywood’s harsh breakups! The couple was spotted smiling and holding hands after a sweet dinner date! See the cute photos!

Chris Pratt, 39, and Katherine Schwarzenegger, 28, were all smiles after a romantic date night at R&D Kitchen in Santa Monica, CA on Wednesday, August 29. The couple was photographed hand in hand, while on a sweet stroll after dinner. Katherine looked casual in an all black outfit — sporting leggings, a long sleeve and sneakers. The Guardians of the Galaxy actor followed suit, dressed in dark shorts, with a matching v-neck t-shirt and a baseball cap. See the most recent photo of the couple, below!

The author and famed daughter of Arnold Schwarzenegger, 71, has even hit it off with Pratt’s son, Jack, 6. Katherine has been photographed while out with the actor and his son on multiple occasions. The couple, along with Jack, were most recently spotted together at the end of July after attending church. They were also seen making his son laugh outside an ice cream shop.

Pratt’s outing with his new girlfriend came just one day after he was photographed with his ex-wife, Anna Faris, 41. The two were spotted out on a family walk with their son in Santa Monica on Tuesday, August 28, proving that exes can be friendly. Not to mention, the on-screen veterans are focused on being the best co-parents to their son. 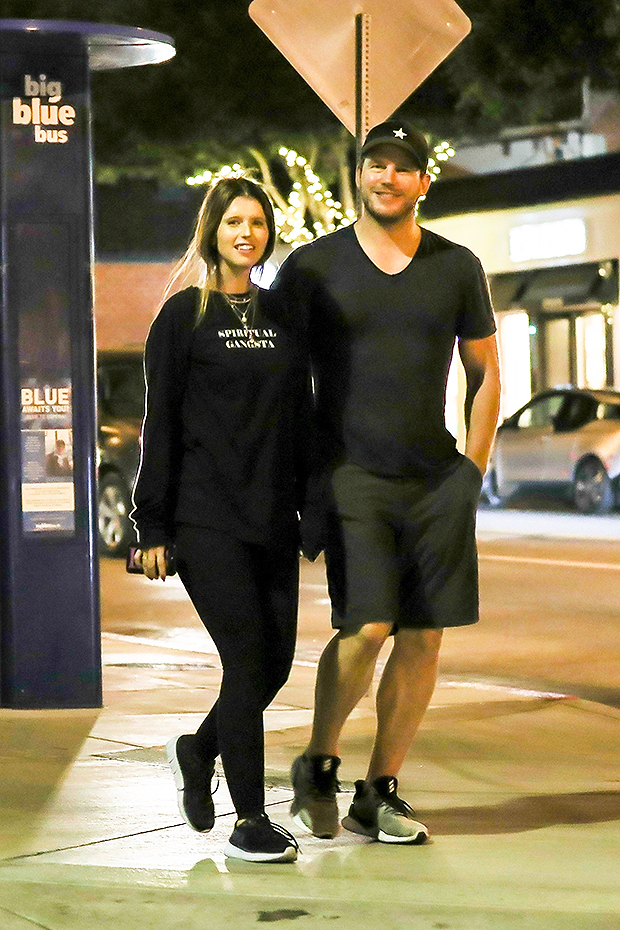 Chris Pratt and Katherine Schwarzenegger all smiles after a date night at R&D Kitchen in Santa Monica, California on Wednesday, August 29, 2018.

Anna and Pratt were married for eight years before their subsequent breakup. The two first announced they were splitting on August 6, 2017 in a joint statement on Facebook. “Anna and I are sad to announce we are legally separating,” the statement said. “We tried hard for a long time, and we’re really disappointed.”

“Our son has two parents who love him very much and for his sake we want to keep this situation as private as possible moving forward,” they continued. “We still have love for each other, will always cherish our time together and continue to have the deepest respect for one another.”

Meanwhile, there’s been much speculation about a secret engagement between Pratt and Katherine. However, it seems a bit unlikely at the moment. — Let’s remember that these two just went public a few months ago. Katherine and Pratt were first spotted together in June, around Father’s Day.