Melania Trump, 48, was out of the public eye in May 2018, but while her communications director Stephanie Grisham said that she was having embolization surgery for a “benign kidney condition,” many are wondering whether that’s really what was going on in the Walter Reed Hospital. That’s because the First Lady stepped out in a pale pink top on August 28 looking a little different — and no, this didn’t have anything to do with the rumored body double that conspiracy theorists think she and husband Donald Trump, 72, hired. Instead, it had everything to do with her chest, which looked way bigger than it used to in the tight tank. Is it possible that Melania actually had a boob job under the guise of getting kidney surgery?

The Internet sure seems to think so. “So how many people think that Melania’s new illness was really a new boob job?” one person tweeted — and judging by the memes that followed, many people agreed. Someone even pointed out, “We’ve all seen her naked and we all know the original size of her breasts.” But that being said, you don’t have to see the FLOTUS in the nude to notice the difference between then and now. Just check out this pic of Melania walking a 2010 red carpet and looking very different in the black gown than she did in the pink tank she just sported.

What do you think, was the First Lady lying about the reason for her hospitalization in May? 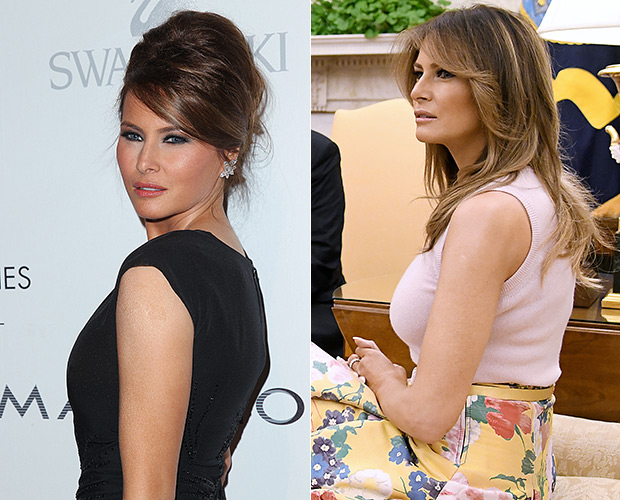 We've all seen her naked and we all know the original size of her breasts.

While we’d expect a fib like this from her husband, we were really hoping she’d keep it real with us. It’s not the plastic surgery that we mind — you do you, Melania! — but the possible dishonesty.