OMG! Meghan Markle flaunted her sexy legs in a mini tuxedo dress at a performance of ‘Hamilton’ with Prince Harry in London. See her full look below!

Meghan Markle, 37, and Prince Harry, 33, headed to the theater on August 29 to see Hamilton at the Victoria Palace Theatre in London, and the Royal couple was dressed to the nines! Meghan showed off her legs in her shortest dress since becoming a royal! We haven’t seen her knees in years! LOL. But seriously, Meghan has spent the last year dressing in midi skirts and dresses and tailored trousers. The shortest dress we can recall her wearing was when she announced her engagement to Prince Harry in November 2017, and even that look hit just under her knee. The VIP couple watched the critically acclaimed musical next to creator and star Lin-Manuel Miranda! The gala performance was a charity event that raised money for those affected by HIV in South Africa, a cause close to Harry’s heart.

Meghan’s legs appeared extremely thin in her tailored tuxedo dress, which was designed by Judith & Charles. The star has always been slender, but we hope she isn’t too stressed out about her estranged father’s recent comments. She paired the look with black pumps and a sparkly gold clutch. She wore her hair in a perfectly imperfect updo. Her makeup was bronzed and beautiful, and she wore a slightly smokey eye. Of course, she kept her mani neutral, and showed off her gorgeous engagement ring and wedding band. 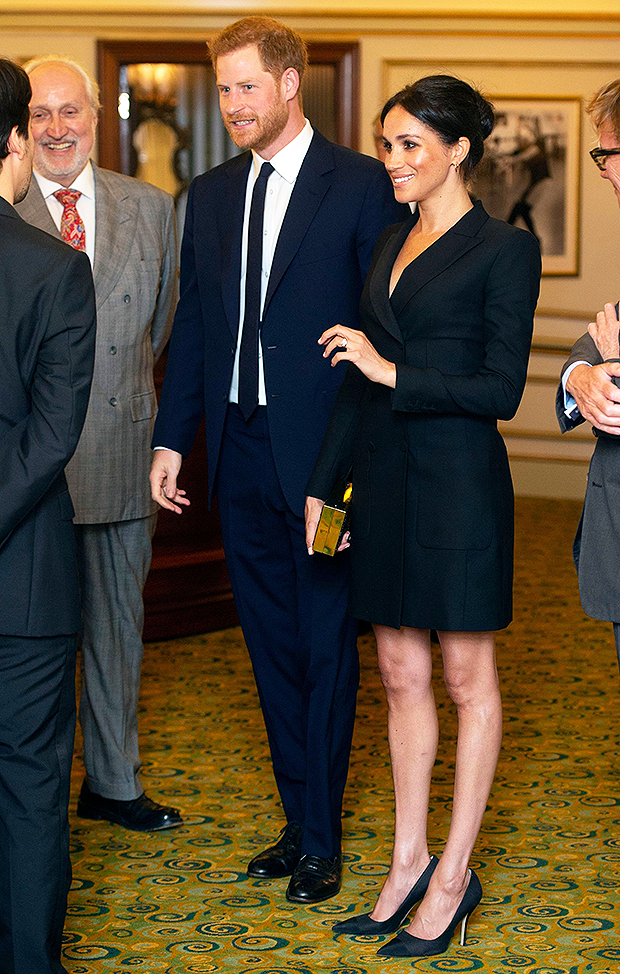 Meghan’s style since becoming a royal has been remarkably conservative. She used to wear bright, bold colors, short mini skirts, and patterns galore. Since joining the Royal family, with good reason, she has obeyed the unspoken rules of the Queen and the family. With this leggy look, we got a glimpse of the pre-Royal Meghan, and she looks absolutely fantastic!