Jennifer Garner looked radiant in a black dress at the red carpet premiere of her film, ‘Peppermint’ on Aug. 28 in LA! She appeared to be in good spirits just days after taking her now ex-husband, Ben Affleck to rehab.

Jennifer Garner, 46, was the bell of the ball at the red carpet premiere of her new thriller, Peppermint on Tuesday, August 28 in Los Angeles. Despite dealing with her personal family issues, the actress looked stunning in a one-shoulder LBD, which featured a long train. She wore her hair down with loose waves, and accessorized with silver and black bracelets to match her open-toe stilettos. Garner looked fresh-faced as she smiled for photogs ahead of the debut of Peppermint. — See her full look below!

Garner’s big night came just a few days after she was photographed looking visibly emotional as she drove her now ex-husband Ben Affleck, 46, to rehab. The actress arrived to Affleck’s Pacific Palisades home on Wednesday, August 22 around 6 PM, where she reportedly staged an intervention for the father of their three children, Violet, 12, Serafina, 9, and Samuel, 6. Affleck had reportedly been drinking days before Garner’s intervention, and was allegedly not doing well. Photos of her driving him to a rehab facility showed Affleck distraught and in tears as he sat in the backseat of his ex’s car.

Following Affleck’s struggles, it was reported that he had reached a divorce settlement with Garner. The two have been friendly co-parents ever since their 2015 separation, which was followed by their 2017 divorce filing. 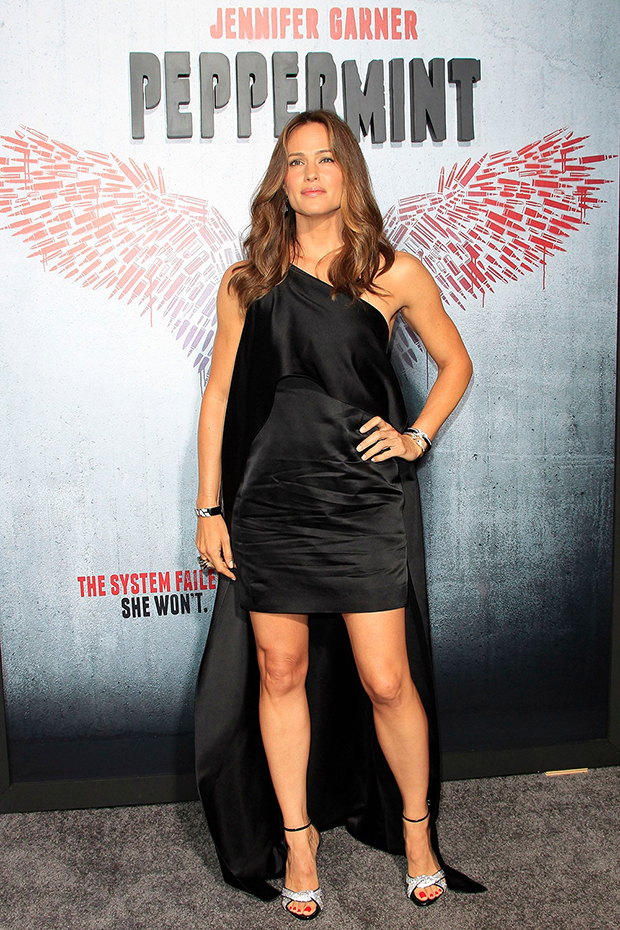 Jennifer Garner at the red carpet premiere of her new thriller ‘Peppermint’ on Tuesday, August 28, 2018 in Los Angeles.

Affleck struggled with alcohol addiction for a long time. In March 2017, he announced he had successfully completed a stint in rehab, and was working toward a positive recovery. The actor appeared to have kept that promise until his recent breakup with Saturday Night Live producer Lindsay Shookus.  Affleck’s sobriety also came into question after he was photographed on dates with Playboy model Shauna Sexton, in mid August. The actor’s return to rehab marked his third inpatient stint in 17 years.

Despite everything they’ve been through, Garner is sticking by Affleck’s side. “Jen has made it very clear to Ben that leaving rehab is not an option right now, for him or the kids. Jen loves Ben with all her heart and she always will … he’s the father of her children and will always remain dear to her, but she’s growing weary of constantly picking up the pieces after him,” a source close to the actress told HollywoodLife EXCLUSIVELY.