Oh no! It’s possible Angelina’s custody battle may take more from her than just her kids — she’s losing weight as well, according to a recent report. Is she going to be okay?

There’s nothing like a little stress to get your weight fluctuating — and Angelina Jolie, 43, is under a whole lot! The actress is in the middle of a custody battle with her ex Brad Pitt, 54, fighting to keep her kids Maddox, Zahara, Pax, Knox, Vivienne and Shiloh under her roof. Although the divorcing couple did settle on an interim agreement on August 22, there’s still a lot up in the air and the stress has reportedly taken a major toll on Angelina. “Angie has stopped eating almost entirely and has now shriveled down to 76 pounds,” a source told Star magazine. “Angie’s an emotional and physical wreck — and she’s on the verge of collapse!” The insider even added, “She’s practically living on ice cubes, and she’s so anorexic her skin is sagging and her bones are almost breaking. She needs help, and fast.”

A doctor also spoke to the outlet, worried about the actress’s weight. “There’s almost no subcataneous fat on her arms and her cheeks have no fat either, which is very alarming,” Dr. Gabe Mirkin said. That being said, Angelina has always been pretty thin and was covered up the last time she stepped out in public. She was shopping with her 17-year-old son on August 27 in a nude dress that showed off her curves, but her matching shawl and big black Celine bag kept her body pretty hidden. And just a week earlier, she sported a long, flowing black dress while out with her daughters that also kept her covered.

But if she truly is as scary skinny as the source said, we hope she starts taking better care of herself. Although the actress is understandably going through a hard time at the moment, her kids need their momma to be healthy during this tough time, at the very least! 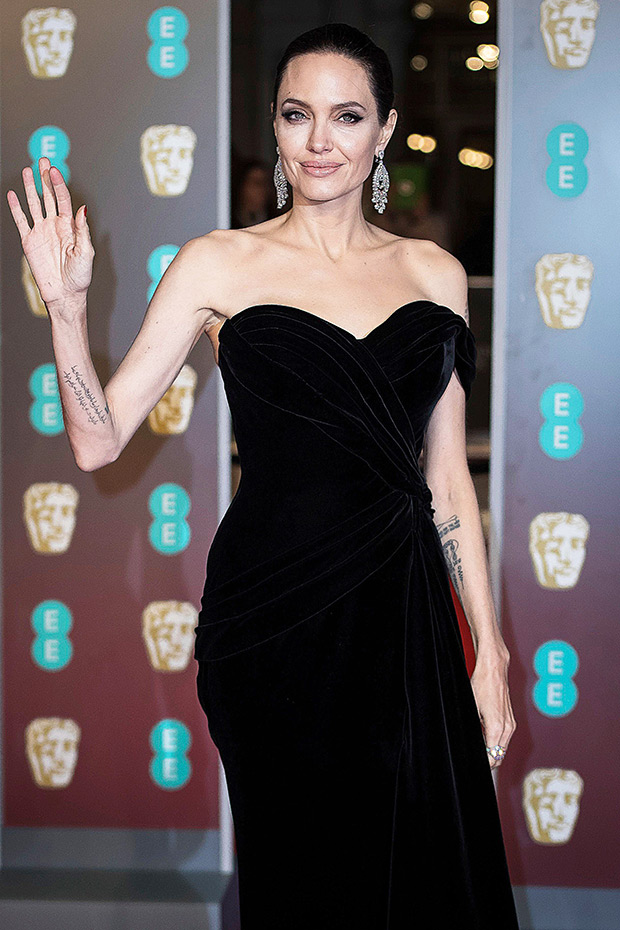 Brad and Angie have been publicly butting heads since she filed for divorce in September 2016. She asked for full custody while he wanted joint, and their ensuing battle has brought up all kinds of personal tidbits into the public eye from missing child custody payments  to $8 million loans. Most recently, Angie fired her lawyer and hired a new one — and we’ve been getting whiplash just trying to follow along!

We can’t imagine how rough this must be for the entire Pitt-Jolie family, kids included, and the last thing anyone wants is for the mother of six to have a health scare due to her dropping weight.

HollywoodLife reached out to Angelina Jolie’s rep for comment on this story but did not immediately hear back.