Going on tour is NOT a walk in the park — for Pink or her kids! The singer’s baby boy has a painful rash, and that’s only the beginning! Click here to find out what’s up with her daughter, 7.

Pink, 38, has been on her Beautiful Trauma World Tour since March, but she isn’t just traveling with her band. It’s a family affair! She scheduled the 128-date tour specifically around what would be best with her kids, and if you haven’t seen the sweet shots of little Willow, 7, running onstage in her pajamas to give her mom a kiss goodnight, you’re missing out! But touring with little ones isn’t always fun and games — and the pic Pink’s husband Carey Hart, 43, posted on August 28 is living proof of that! Looks like Jameson, 1, has been suffering from hand, foot and mouth disease with the signature rash all over his body. “I had Jameson at breakfast yesterday and this vile woman at the table next to us kept staring at him with a sh*tty look on her face,” the former motorcross competitor said. “I told her it was bed bugs.” HA!

While we love Carey’s clapback, sweet little Jameson isn’t the only one in the fam having health issues in the middle of Pink’s tour. His older sister Willow was running a fever of 102 degrees, and the second picture Carey posted was of his braided daughter in the tub with her back to the camera, while her dad laid on the edge, his head resting on a towel. He looked absolutely exhausted — and we don’t blame him! Touring with his wife has got to be hard on the best day, let alone one where both of his kids aren’t doing well. But while Pink has also shared shots showing the hardships of this trip — including Jameson in the bath after waking up in tears at 3 in the morning — there are precious moments too! From her daughter petting a cow to her son standing beside a kangaroo, her Instagram pics will melt your heart.

In fact, Pink has been spending so much time with her kids on her Beautiful Trauma World Tour that the musician was even bashed for it! She’d purposefully scheduled a break in Byron to wind down with her little ones, but got called out for “chilling” in the wake of a cancelled concert in Sydney. Ugh, let her live! 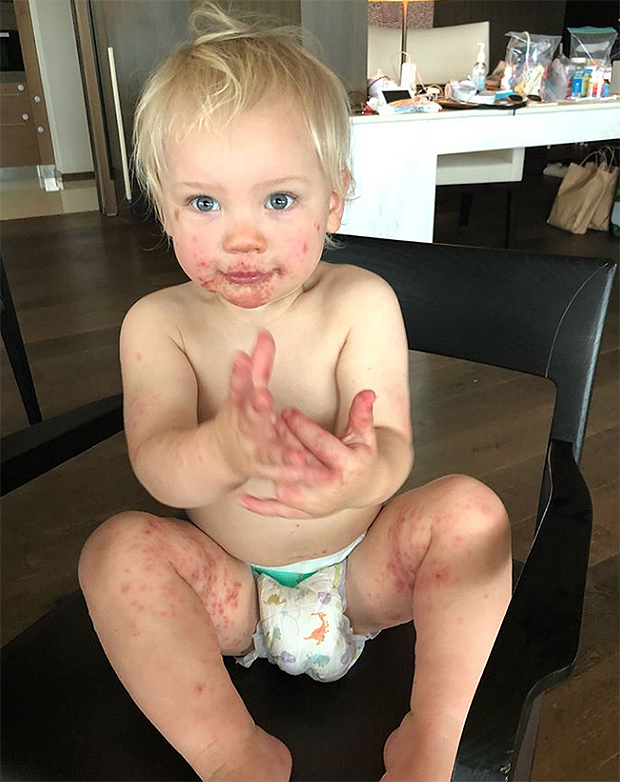 This whole experience clearly has been coming with its fair share of ups and downs, but it sounds like they’re in for an upswing soon. Hand, foot and mouth disease usually lasts about a week at the most, so here’s to hoping Jameson’s rash fades — and his sister’s fever breaks. Fingers crossed!