Does it get any cuter than these two? In case it wasn’t obvious before, Liam just made it crystal clear that he and Miley are all good with a selfie. And the sweet shot even included some special guests!

Our hearts! Liam Hemsworth, 28, just snapped a selfie with Miley Cyrus, 25, while out on a walk with two of their dogs, and if their family outing wasn’t #goals, we don’t know what is! “Strolls with my girls,” the Australian actor wrote. Needless to say, we are SO glad the split rumors about these two that circulated back in July ended up being all wrong. This pic just proves what we already knew — they’re the sweetest! Miley kept her look comfy and cute on their walk with a baggy sweater and pants, plus a ponytail and bare feet. She stood on the path, one dog beside her, another further behind, and looked off into the distance.Liam was the only one paying attention in this otherwise candid shot. He had a fedora and a flannel on, plus a small smile.

This isn’t the first time that the cute couple has nipped breakup rumors in the bud this summer. Just days after the initial speculation surfaced, Liam shared footage of the two cracking up in the car together after he attempted to scare her from behind the wheel. He was driving and singing along to what was on the radio when he suddenly screamed. “I’m going to beat the sh*t out of you,” Miley said. And if silly pranks like that are the biggest issues these two are facing right now, that’s a good sign. They seem totally happy, if you ask us. After that video squashed rumors, a picture of them out to lunch at an organic bakery on August 10 tamped them down even further. And now this? Everyone, it’s time to breathe a sigh of relief. They’re FINE!

And have you heard? Miley’s younger sis Noah Cyrus, 18, is also happily paired up. She made her red carpet debut at the MTV VMAs with boyfriend Lil Xan, 21, on August 20. They couldn’t keep their hands off of each other, and Noah said she was “obsessed” with the rapper. 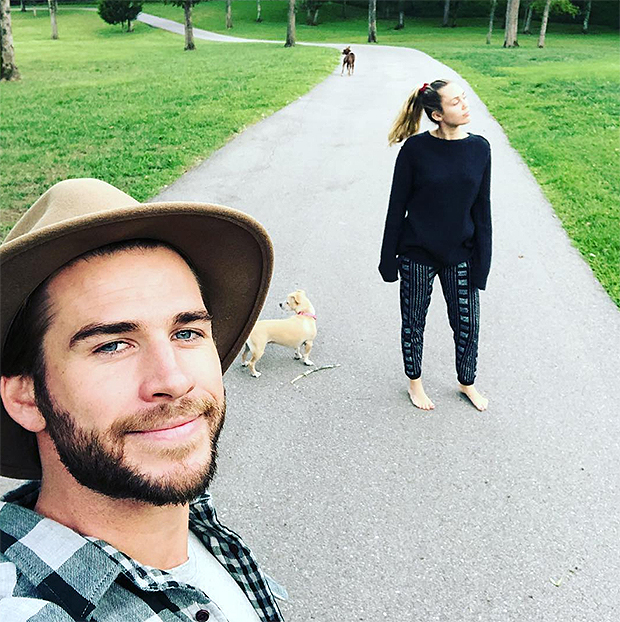 We love seeing the Cyrus sisters so happy! But what do you think — is there any chance we’ll see all four of them on a double date anytime soon? We’d kill for pics.