This isn’t something you see everyday! Jennifer Aniston and Adam Sandler were photographed holding hands in Milan! — But, why? — We’ve got the answer to that…

Nothing to see here! — Jennifer Aniston, 49, and Adam Sandler, 51, were recently photographed holding hands in Milan! However, their PDA snaps were courtesy of work. The two are currently filming the upcoming Netflix comedy, Murder Mystery. Although Aniston is still newly single, following her split from Justin Theroux, 47, these seemingly juicy snaps are platonic. Sandler is a married man!

The two wore matching floral outfits, with Aniston in a dress and Sandler, sporting shorts and a thick mustache for the role. Murder Mystery stars the movie veterans, as a couple who become suspects in the murder of a billionaire. And, this isn’t the first time Aniston and Sandler have worked together. They previously starred in 2011’s Just Go With It.

Aniston and Sandler have been in the European country for a few weeks filming their forthcoming comedy. Filming originally began in Vancouver. In the midst of shooting, Aniston, Sandler and his wife, Jackie spent time at her good friend, George Clooney‘s Lake Como home. In early August, the Friends star was photographed smiling, as she arrived to the villa via water taxi with her co-star and his wife. 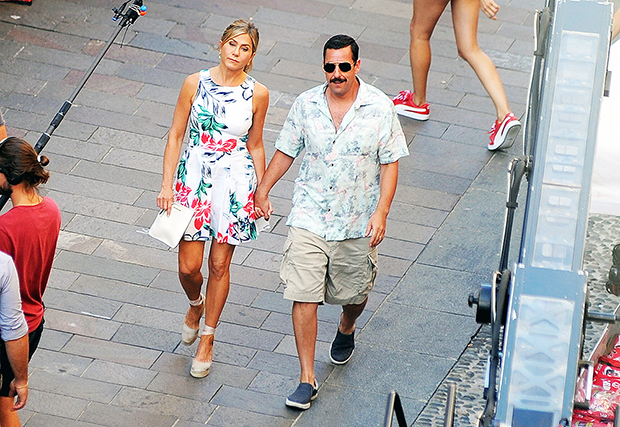 Jennifer Aniston and Adam Sandler holding hands on the set of the Netflix comedy, ‘Murder Mystery’ in Milan in mid August, 2018.

The actress seems to be in great spirits despite her split from Theroux. The two announced their separation on February 15 of this year. “In an effort to reduce any further speculation, we have decided to announce our separation,” Aniston and Theroux said in a joint statement. “This decision was mutual and lovingly made at the end of last year. We are two best friends who have decided to part ways as a couple, but look forward to continuing our cherished friendship.”

The pair were together for nearly seven years and married for two and a half years. Although there’s been rumors of bad blood, Aniston and Theroux insisted they would remain cherished friends.