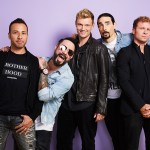 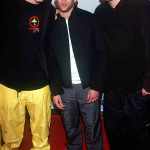 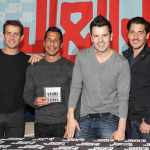 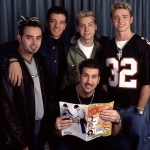 It’s official! BBMak’s back. Christian Burns, Stephen McNally and Mark Barry just made their fans’ year by revealing that – not only are they recording music again – they’re heading out on the road, soon!

It’s been 15 long years for BBMak fans but, finally, their prayers have been answered and the British boyband, which split in 2003, is finally back. Christian Burns, 44, Stephen McNally, 40, and Mark Barry, 39, shared the good news in an Aug. 28 interview with PEOPLE. And the guys, who had hits in 2000 with “Back Here” and “Still on Your Side,” couldn’t be happier to be recording and singing together again. Speaking about their reunion, Christian said, “Back in the day we were like brothers, and we’re dear friends still to this day because we’ve stayed in touch. We’ve seen some of the other bands come back and having a good time performing, and we missed it.”

So, why have they decided to come back right now? Christian added, “We had done some songs on our own and we thought, ‘We have some songs here.’ It just felt like the right time to do it.” Despite their 15-year break, Christian insists that they haven’t changed much and their chemistry remains the same. He also said, “Back in the day we could hardly touch the ground, but this time around we’re really gonna savor a bit more and really enjoy it. We’re doing it all this time on our terms.”

That means two things – new music and a tour. Yes, you heard that right. Christian, Stephen and Mark will be heading out on their U.S. tour in March 2019 but they will be doing three shows in just a few months’ time, in November. Tickets for those shows – New York on Nov. 13, Chicago on Nov. 15, and LA on Nov. 19 – go on sale on Aug. 31. BBMak couldn’t be more thrilled about the upcoming tour. Christian said, “We’re so excited to get back on stage. We’re a little nervous because it’s been 15 years, but as a whole we’re thrilled and excited to be back.” And he added, “We’re excited to see all the old fans again and reconnect, and to perform some new and old songs.”

Guess what? BBMak fans are just as thrilled and their tweets hilariously reflect that. One person tweeted, “Your music has remained a constant in my life since you all began. To say I’m excited would be an understatement!!!” Another fan wrote, “Fantastic! Let me start gathering my coins now! And now that it’s official…welcome back, guys! You’ve been missed!” They certainly have!