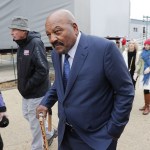 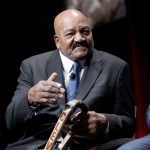 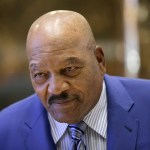 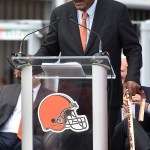 He’s one of the greatest NFL players of all time, but Jim Brown committed a major foul in some fans’ eyes when he threw his support behind Donald Trump. Get all the details about this football legend.

“I should be criticizing [Donald] Trump on every level because he does certain things that call for criticism,” Jim Brown, 82, said during his Aug. 21 appearance on the JT The Brick Show on Fox Sports Radio, per TMZ Sports. “But when I look at television I see all these announcers become experts and they’re pointing the fingers and they’re not doing a doggone thing but pointing their fingers, I find myself really pulling for the president. Now, that would make me very unpopular in the black community, very unpopular with a lot of Americans … but I think that there are certain good things that are coming out of this Presidency because we’ve never seen anything like it.”

The statement made Jim popular with Donald, 73, who tweeted his love for Jim’s support. “Thank you to the great [Jim Brown], perhaps the greatest running back of all time, for your wonderful words and support. Since our meeting in New York, African-American UNEMPLOYMENT has reached the LOWEST LEVEL IN HISTORY. You get it!”

Jim Brown is one of the best running backs of all time. James Nathaniel Brown played nine seasons with the NFL, and by the time he retired in 1965, he had 2,359 carries for 12,312 rushing yards and 106 touchdowns, which were all records at the time. He played in nine straight Pro Bowls, helped the Browns win the NFL championship in 1964, and was inducted into the Pro Football Hall of Fame in 1971.

He had an extensive acting career after football. Jim began acting in 1964, right before the end of his football career. After hanging up his cleats, he focused on acting, starring in The Dirty Dozen, The Split, Riot, and more. The release of Shaft in 1971 led Jim to star in many movies categorized as “Blaxploitation,” including Slaughter, Black Gunn, and Three The Hard Way. His last role was in 2014’s Draft Day, where he played himself.

Jim is active in charity work. For decades, Jim has dedicated himself as an activist for minorities and inner city communities. His Ameri-I-Can program is meant to “empower individuals to take charge of their lives and achieve their full potential.”

Thank you to the great @JimBrownNFL32, perhaps the greatest running back of all time, for your wonderful words and support. Since our meeting in New York, African-American UNEMPLOYMENT has reached the LOWEST LEVEL IN HISTORY. You get it!

It’s always an Honor to be a guest of the @NFL for #NFLHonors. pic.twitter.com/6xkvJCMS57

He has his own legal issues. Jim has a history of run-ins with the law, per CNN, including being charged with assault with intent to commit murder in 1968 (which would be dismissed after the victim refused to name him as the assailant) allegations of rape in 1985 (also dismissed after inconsistent testimony) and domestic violence in June 1999. Jim allegedly threatened to kill his wife, Monique Brown, a claim she later recants. He’s found guilty of vandalism after smashing her car with a shovel from that incident. He was sentenced to three years probation. In early 2000, he’s sentenced to six months in jail for refusing the court-ordered counseling and fulfilling the community service sentence. He serves four months of it in Ventura County in 2002. Since then, he has stayed out of legal trouble.

He met with Trump in 2016. Back when Donald was “president-elect,” Jim stopped by Trump Tower in Dec. 2016 to discuss issues facing the African-American community. “When he goes through what he went through to become the president, he got my admiration,” he said at the time, per CNN. “No one gave him a chance.” By the way, before anyone gets it twisted, Jim actually voted for Hillary.