Melania Trump has had another White House gardening fail, this time trying to plant a tree in $700 sky high pink heels. We’ve got the pics of her stilettos sinking into the dirt.

Melania Trump is clearly not a person who has spent very much time gardening or anywhere near dirt. The first lady planted a tree on the White House lawn on Aug. 27 and wore $700 pink high heels for the occasion, where she nearly sank into the open soil while uncomfortably holding a shovel. She attended the 3pm ceremony on the South Lawn to plant a presidential tree in the same outfit she wore earlier in the day to welcome the president and first lady of Kenya. Note to Melania: Christian Louboutin heels are not gardening footwear! We know she owns sneakers and other more causal footwear that would have been far more appropriate. Later she was roundly mocked for her high-heeled gardening on Twitter.

The 48-year-old’s outfit was perfect for a reception with a foreign head of state, but not for a tree planting. She and husband Donald Trump, 72, greeted Kenyan President Uhuru Kenyatta his wife Margaret earlier in the day and she wore a lovely and glamorous summer outfit. It featured a $3,950 colorful floral skirt by Valentino and a blush sleeveless top that matched her Louboutins. The couples posed on the White House steps and later chatted during a meeting inside.

Sadly, Melania didn’t change into a more appropriate gardening outfit for her tree planting later in the day. She was joined by two presidential descendants  Mary Jean Eisenhower, granddaughter of President Dwight D. Eisenhower, and Richard Emory Gatchell, Jr., a fifth-generation grandson of President James Monroe. Together they planted a sapling that came from the Eisenhower oak that towers next to the White House’s East Wing. Her sky-high heels were no match for the dirt, as they sank easily into the soil. 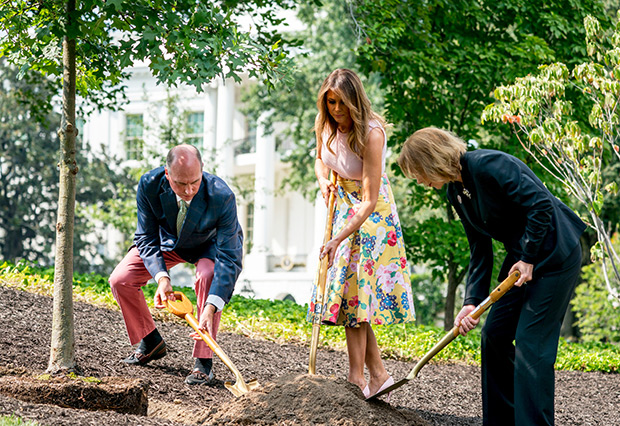 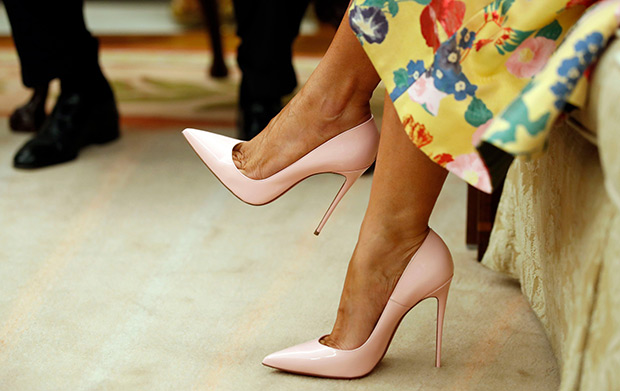 Melania later posted photos from the occasion to her FLOTUS Twitter page, saying it was an honor to plant the sapling and thanked the White House Historical Society for organizing the event. The comments immediately lit up with people mocking her choice of footwear. “I must put on the stilettos next time I’m gardening,” one user snarked and another scolded, “Girl – you’ve never gardened a day in your life or else you would know no one wears 5” heels to plant a tree!! Nice try tho..” Another added “I always wear my white stilettos when I plant a tree…” before telling Melania that, “There is not a single, solitary thing about you that is in any way authentic.”

Another user was in disbelief with her outfit choice, commenting, “In stilettos and a cocktail dress? This is a phony account right?” Don’t forget Melania’s had some other epic gardening fails in the past. She rocked a $1,362 plaid Balmain top, red gloves and oversized sunglasses while planting veggies with DC school kids in the White House vegetable garden in Sept. of 2017.