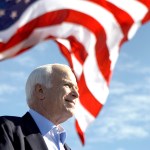 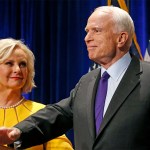 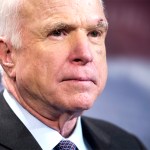 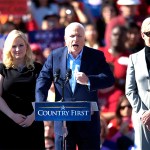 After a long battle, Senator John McCain has decided to discontinue his cancer treatments. In the wake of this announcement, Meghan McCain thanked everyone for the ‘strength to carry on.’

“Last summer, Senator John McCain shared with Americans the news our family already knew: he had been diagnosed with an aggressive glioblastoma, and the prognosis was serious,” the Arizona senator’s family said in a statement on Aug. 24, per CNN. “In the year since, John has surpassed expectations for his survival. But the progress of disease and the inexorable advance of age render their verdict. With his usual strength of will, he has now chosen to discontinue medical treatment,” the family of the Arizona Republican said in a statement.

“Our family,” the statement continued, “is immensely grateful for the support and kindness of all his caregivers over the last year, and for the continuing outpouring of concern and affection from John’s many friends and associates, and the many thousands of people who are keeping him in their prayers. God bless and thank you all.”

After the statement about John’s, 81, decision was released, his wife and daughter shared their thoughts online. “I love my husband with all my heart,” Cindy McCain, 64, tweeted. “God bless everyone who has cared for my husband along this journey.”

Meghan McCain, 33, addressed all those who have supporter her father and her family during this hardship. “My family is deeply appreciative of all the love and generosity you have shown us during this past year,” she tweeted. “Thank you for all your continued support and prayers. We could not have made it this far without you – you’ve given us strength to carry on.”

I love my husband with all of my heart. God bless everyone who has cared for my husband along this journey. pic.twitter.com/v27sEbboii

My family is deeply appreciative of all the love and generosity you have shown us during this past year. Thank you for all your continued support and prayers. We could not have made it this far without you – you've given us strength to carry on. pic.twitter.com/KuAQSASoa7

John McCain was diagnosed with brain cancer in July 2017, after undergoing surgery to have a blood clot removed. During the procedure, the doctors discovered the presence of glioblastoma. The tumor was deemed “aggressive,” and was quickly removed, but that was the start of his yearlong fight. Yet, today’s decision to end treatment indicates that the senator and decorated war hero has will let nature take its course. He’s been absent from Congress since December, and his family has reportedly gathered in Arizona to say their good-byes.

Despite the aggressive cancer, John continued to serve the American people – often at the ire of President Donald Trump, 72. When Sen. McCain voiced his opposition to a “quick-and-dirty” repeal of the Affordable Care Act (aka Obamacare) Trump seemingly mocked the cancer-stricken McCain. Similarly, Kelly Sadler, a White House aide, reportedly taunted McCain’s opposition to Trump’s pick for CIA director. “It doesn’t matter, he’s dying anyway,” she allegedly said during a White House meeting.