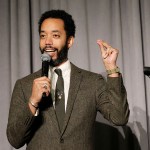 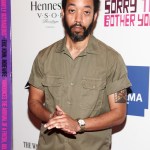 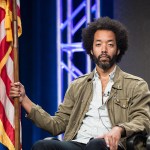 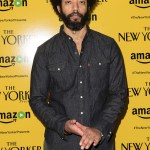 Wyatt Cenac opened up about whether he’d do a second season of ‘aka Wyatt Cenac’ & gave advice on how to survive protest fatigue in the age of Trump!

Wyatt Cenac‘s short form series aka Wyatt Cenac (that you can watch on Topic.com) proves he’s just as socially critical in narrative form as he was on The Daily Show and is on Problem Areas. aka Wyatt Cenac, which earned Wyatt an Emmy nomination for Outstanding Short Form Comedy Or Drama, has the comedian not only fighting crime in Brooklyn by night as the masked Viceroy, it features him dealing with the harmful effects of the neighborhood’s gentrification by day — from parents who bring their babies into bars, to a specialty shop that only sells different flavors of mustard. Playing a super hero who eventually grows weary of his looming, often thankless responsibilities in his series, Wyatt told HollywoodLife his advice for those activists out there trying to survive a similar protest fatigue. “I would say the biggest thing I’ve learned is making sure one, that you have people in your life who are resources that you go to when you need to decompress,” he said. “But also, I think we all want to change the world, and sometimes changing the world it might mean looking closer to home first. And figuring out the little victories that you can create in your own city that can hopefully catch fire and spread beyond your city… Make it more localized in a way that you will at least get more accountability that you might get on a national level.”

When it comes to the possibility of a second season, Wyatt is all in. “I would like to do another season of it,” he went on to say. “It was a lot of fun to do and I think one of the coolest things for me was the core group of friends, which were Jeena Yi and Thomas Fowler and Emily Tarver. One of the most fun moments for me was we were in between takes and resetting a camera, and I remember watching the three of them just joke around and get along in a way that felt like they were longtime friends and so much of that dynamic I feel like they were able to put on camera.”

After being writing, sketch comedy and improv partners with Thomas in Los Angeles, Wyatt lept at the chance of collaborating with him again in “a way that we actually get paid in something more than drink tickets.” “I was so appreciative and just so grateful that he was up for it but also that he came to New York and stayed in New York for the whole shoot,” he said. “And it was just fun to get to work with him in that way again. And Emily and Jeena, I had met both of them just from the audition process and I had not idea whether any of these people would get along and it was such a pleasant surprise when everybody did.”

Wyatt revealed that there’s a way to be a positive participant in the often cyclical gentrification process by trying to “keep your footprint small enough that it doesn’t totally wreck the ecosystem that exists.”  “You can contribute in a way that’s inclusive or you can contribute in a way that’s selfish,” he added. “I think that is the question and the challenge and you would hope that would be inclusive because at the end of the day, you see it now in New York like in a neighborhood like Williamsburg 10 years ago, the complaint was, ‘Oh, there are hipsters that are moving and they’re opening all these bars and restaurants,’ and you’re now seeing another wave of gentrification that’s hitting, where it’s like, ‘Well now there’s an Apple Store and a J. Crew and all of these high-end places that weren’t in Williamsburg a decade ago.’ And those things are pushing the hipsters of 10 years ago, and you would hope it’s all done with respect, because the truth of the matter is you’re going to get pushed out at some point, and you hope that the person pushing you out does it better than you may have pushed the last person out.”