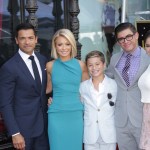 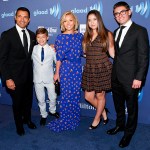 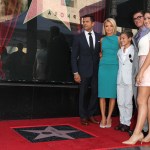 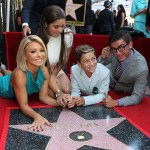 Oh, if looks could kill. Michael Consuelos, 21, gave his folks – Kelly Ripa and Mark Consuelos – quite a frosty glare when they surprised him on the ‘Riverdale’ set. It’s embarrassingly hilarious!

On one hand, it’s really cute how proud Kelly Ripa, 47, and Mark Consuelos, 47, are over their son, Michael Consuelos landing a role on Riverdale. On the other hand, it’s a bit cringe-inducing when they act like stereotypical parents, like they did on Aug. 22. Mark and Kelly shared the same Instagram story video of them surprising Michael at his trailer on the Riverdale set. “It’s bring your parents to work day!” he said, causing Michael to give a very confused look to his family.

“Great,” he said while flashing a less-than-excited smirk, before allowing his parents to come onto set. While this might seem a bit rude, just imagine how any other 21-year-old would feel if their parents decided to visit them at work. Granted, this shouldn’t be the first time that Michael bumped into Mark on set, since they’re…kind of playing the same character. Michael will portray a younger version of Mark’s Hiram lodge, Riverdale’s evil businessman, on an episode of the CW series’ third season. Lili Reinhart and KJ Apa will also play their on-screen parents’ younger versions.

If anyone needed any proof how amazing this Riverdale episode is going to be, they just had to look at the Teen Choice Awards. Both Mark and Michael attended and for real – they looked less like father and son and more like a pair of brothers. They had the same eyes, nose and smile. It’s going to be amazing to see Michael portray young Hiram (so long as he’s not too embarrassed to take a few acting tips from his old man.)

Michael shouldn’t feel too bad. His parents also embarrassed his younger sister, Lola, 17. Lola complained on her mother’s Instagram, saying Kelly was taking too many Comic-Con pictures. “You should [then] turn off your phone and clean your room,” Kelly said. Oh, at the end of the day, it doesn’t matter if it’s on Snapchat, IGTV or what: a mom’s still a mom, and you should do your chores.