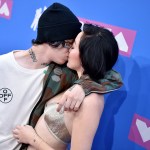 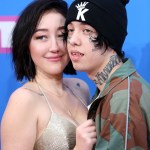 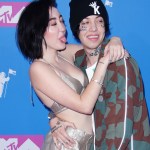 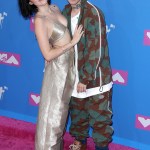 Noah Cyrus revealed why she’s so ‘obsessed’ with Lil Xan, when the two made their red carpet debut as a couple at the 2018 MTV Video Music Awards on Aug. 20.

Many couples walked the red carpet at the 2018 MTV Video Music Awards on Aug. 20. But no pair quite topped the PDA we saw between Noah Cyrus, 18, and Lil Xan, 21, who were walking a red carpet as lovers for the first time. The two were happy to explain why they couldn’t keep their hands away from each other, especially Noah. “I’m obsessed with him,” the “Again” singer told Entertainment Tonight. “It’s hard when no one understands the time zones and the schedule, and no one really understands that more than him.”

Noah’s first headlining tour, Good Cry Tour, doesn’t kick off until Sept. 22 in Fort Lauderdale. But she hasn’t been relaxing in the meantime. She tailed Katy Perry, 33, across North America for the first two months of the “Swish Swish” singer’s Witness tour, which began in Montreal on Sept. 19, 2017. And Noah’s a music festival regular, having performed at big gigs in 2017 like Wango Tango and the iHeartRadio Jingle Ball. “It’s cool to find somebody that understands that and totally gets [it] when you’re a little bit pissy because of your f**kin’ [schedule],” Noah added. “All those world tours,” Lil Xan chimed in. “I got, like, two more tours coming up. It’s just something you get used to, you know? But it’s part of the job.”

But they’re not just dating because they empathize with one another’s schedules. Earlier, Lil Xan was asked if the two were “actually in love,” and he shot back, “Of course we’re in love.” Well, there you have it! Noah and Lil Xan are the real deal, and their “Live or Die” single — which just dropped on Aug. 20 — wasn’t some publicity stunt. And Noah really couldn’t stop talking about Lil Xan at the VMAs. “Look at his cute little like face and smile. And he’s like the sweetest ever and treats me like a princess. And when I’m hungry he gets me chicken nuggets,” Noah told Billboard while caressing her rapper boo’s face. “And he tells me I’m beautiful like every five seconds of the day and he’s just like the sweetest ever. And like, always cuddles with me.”

Raps, cuddles, and buys chicken nuggets for you — that’s all one can ask for in a boyfriend! The “Betrayed” rapper first posted a picture with Noah on July 28, and we’ve been obsessed with their relationship ever since.