A picture tells a thousand words, and it looks like this one points to a romance reconciliation between G-Eazy and Halsey! The exes are reportedly back together after leaving a VMAs after party holding hands!

Are Halsey, 23, and G-Eazy, 29, back together? — While they have yet to officially confirm that they’ve rekindled their romance, the proof seems to be in the picture! The exes, who split on July 3, were photographed leaving an MTV Video Music Awards after-party together, holding hands, on August 20 in New York City! The singer and rapper were pictured leaving Travis Scott’s VMAs after-party at 1 OAK, where they hopped in the same car around 4:40 AM.

G-Eazy did attend the VMAs, and even walked the red carpet solo, while Halsey did not. The singer revealed why she didn’t plan on attending the show when a fan asked on Twitter. “bc I directed all my own music videos this album just to have @MTV “#wcw” me to death and not nominate me for anything so it didn’t feel right to go. I’m happy you guys liked the videos. That’s all that matters to me,” she replied.

Halsey and G-Eazy dated for nearly one year before she announced their split in a note on Instagram. “I normally keep this kind of thing private but provided our public nature I feel the need to inform my fans. G-Eazy and I are taking some time apart. I’m eager to continue the upcoming passage of time dedicating myself to my art and my career, and the duration of my tour. I wish him the best. Thanks for respecting our privacy at this time,” she wrote on July 3. 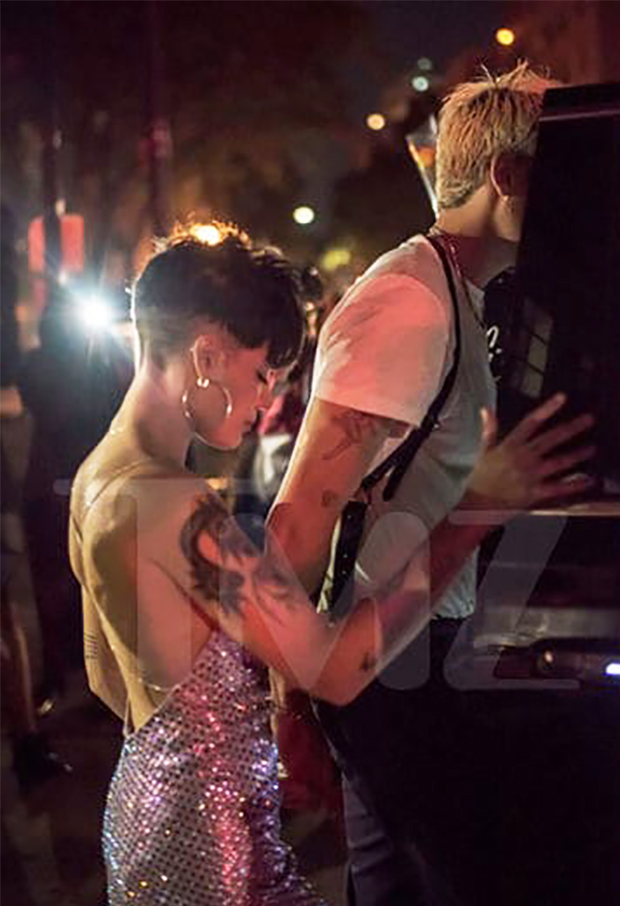 The couple’s split came after G was arrested at an airport in Sweden for alleged drug possession (cocaine), assault and resisting arrest. Halsey was with him at the time. However, it’s unclear if the incident played a role in their split.

Interestingly enough, TMZ caught up with Halsey two weeks after she announced their split, where she alluded that getting back with an ex isn’t too smart. “You’ll catch feelings,” she explained. — So, maybe G is the exception?

Halsey and G-Eazy have been known for the affectionate stage presence when collaborating, especially on their mega hit “Him & I”. The two first began dating around August 2017, when they seemed to confirm the news on social media. They became Instagram official in early September 2017.