Goddess! Even looking so exhausted and wearing no makeup, Rihanna still looks stunning. We’ve got her topless pic where she claims to be ‘sleepy AF.’

When does Rihanna not look completely stunning? Uh, NEVER! That includes a pic she shared with fans on Aug. 20 where she looked like she could really use a nap as her eyes were half-open. She captioned the Instagram stories photo “Sleepy AF” but she still appeared so gorgeous. In the selfie she wasn’t wearing any makeup at all, showing off how naturally beautiful her face is while she wore her hair down long and messy. She didn’t appear to have a shirt on, as the photo was clipped halfway down her bare chest where she could be seen wearing nothing but a gold chain around her neck.

Since seflies can appear backwards, RiRi’s shoulder tattoo that reads “Never a failure, always a lesson” is seen in readable form. It’s actually inked on her body backwards so that when she looks in a mirror, she can see the wording herself. The 30-year-old has had the empowering saying on her since 2009 and with all of the success she’s had in life both in music and business ventures, it sure has paid off.

Maybe Rihanna is tired because she’s in the middle of shooting a film in Cuba alongside Donald Glover. They’re both starring in a movie musical called Guava Island alongside Letitia Wright and Nonso Aonzie. We’re not sure what the plot of the movie is, but with a cast like that we can’t wait! She shared an adorable video on Aug. 20 showing her dancing around a square in Havana with a straw hat in her hand while wearing a gold sundress. Seriously, she is SO stunning and looks so deliriously happy. She got over 4.5 million likes in just three hours after posting it to IG. 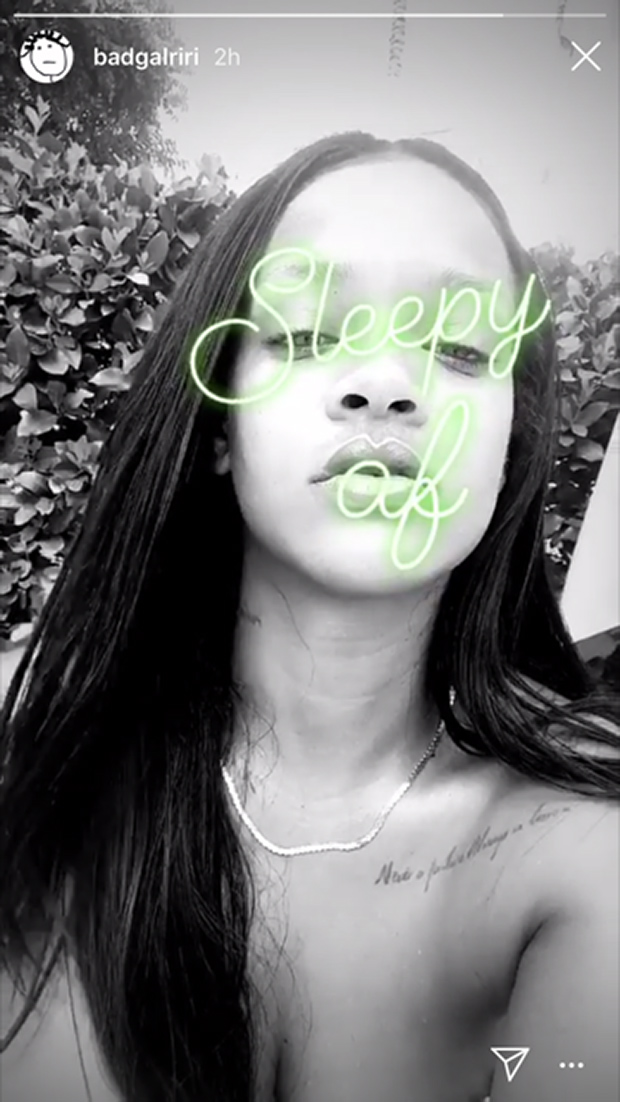 Rihanna shared yet another makeup free selfie on Aug. 19, though it was in color and not in black and white like the one today. She had just Vaseline on her lips and gazed into the camera with her green eyes. She held up a towel to her chest, showing off her bare shoulders like in today’s pic. She’s obviously loving her time in Cuba, feeling so confident.