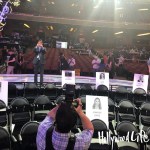 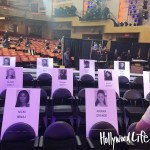 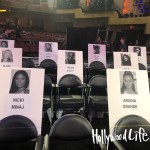 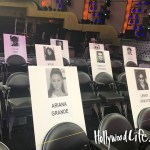 Just one day after calling out Kylie Jenner and Travis Scott on Twitter, Nicki Minaj was expected to sit RIGHT by them at the VMAs on Aug. 20…until the seats were moved at the very last minute!

UPDATE: While the original seating cards stated that Travis Scott and Kylie Jenner would be sitting behind Nicki Minaj at the MTV VMAs, a new report claims the seating arrangements will be tweaked in wake of Minaj’s Twitter rant against the couple. Travis will now sit on the opposite side of the room from Nicki. Interestingly, Kylie and Travis’ new seats happen to be DIRECTLY next to another one of Nicki’s nemeses…Cardi B! The apparent move is all about avoiding ongoing drama, a source tells TMZ, adding that it should cushion any fear of retaliation or continued comments from Minaj. — Sounds pretty juicy if you ask us!

ORIGINAL STORY The seating cards for this year’s MTV Video Music Awards reveal that Nicki Minaj is seated DIRECTLY in front of Travis Scott and Kylie Jenner at the show. Normally, this wouldn’t be cause for concern — but since Nicki called the couple out on Twitter Aug. 19, it could make things a bit uncomfortable. In case you aren’t caught up on this drama, Nicki has no beef with Travis on a personal level. However, when it comes to their careers, she made it clear that she’s not happy about his position ahead of her on the Billboard charts after they both recently released albums.

To express her concern, Nicki ranted on social media about the unfairness of numbers when it comes to album sales. It seems she is pissed that Travis has been able to sell albums by offering a copy of the record with sales of tour merchandise — because he had Kylie promote the merch on social media. Nicki was insistent that she would’ve sold more copies of her album than Travis if Kylie hadn’t posted about her man’s merch on Instagram (Kylie also revealed that she will be joining Travis on tour, along with their daughter, Stormi). “I put my blood sweat and tears in writing a dope album only for Travis Scott to have Kylie Jenner post a tour pass telling ppl to come see her and Stormi lol,” Nicki wrote. “I’m actually laughing.”

In he rant, Nicki also revealed that she had spoken to Travis about the ordeal, and alleged, “He know he doesn’t have the #1 album this week.” Well, if it’s true that they have spoken, hopefully that will help avoid an awkward confrontation at the VMAs!

Travis and Kylie have yet to comment on the drama with Nicki, but we’ll all be watching very carefully to see if anything goes down at the show!