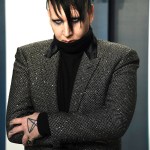 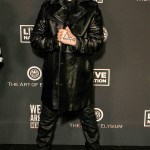 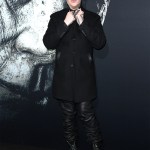 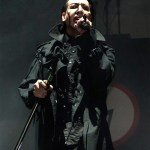 Marilyn Manson collapsed while performing at a concert in Texas! Find out his condition here.

Marilyn Manson took a fall on stage after complaining he was under the weather on Saturday, Aug. 18. The singer was performing “Sweet Dreams” at the Cynthia Woods Mitchell Pavilion in The Woodlands, Texas — an outer suburb of Houston — when his knees gave way, and he collapsed onto some sound equipment. Although he left the stage after his collapse, which happened four songs in, he did come back to the stage again before leaving for good. Following his premature departure, he took to Twitter to let his fans know that he was OK, writing, “Thanks Houston for being understanding. I ended up in doctor’s care, but I gave it my best and you guys were amazing.” Watch the scary fall below that happened after he told the audience he might suffering from “heat poisoning”!

Manson previously ended another concert in Long Island early, but under far different circumstances. Before he made his exit, his band had to improvise tunes as the singer walked around the stage, incoherently ranting to himself and at the audience and leaning upon the walls. And this was after he showed up to the gig, which happened on Feb. 15, a full 90 minutes late.

Before that, Manson had a scary on-stage mishap in the fall of last year. While he was in the middle of his set at the Manhattan Center Hammerstein Ballroom in NYC — and coincidentally enough performing “Sweet Dreams” — Manson attempted to climb two huge prop guns when the structure buckled under his weight. He was soon placed on a stretcher and rushed to a hospital.

We’ll keep you posted with all of the latest updates from Marilyn Manson’s performances. In the meantime, check out pics of the rocker with our gallery above.