All eyes were on Ariana when she performed at the VMAs — which is saying something, considering she performed with 50 other dancers! Click here to check out the awesome outfit that stole the show.

Ariana Grande, 25, is always stylish, so we knew she’d hit the MTV Video Music Awards stage dressed to impress — and she didn’t let us down!  She didn’t just blow us away with her larger-than-life vocals as she performed “God is a Woman” from her new album Sweetener, but her outfit had our jaws dropping as well. The singer wore a glittering gold two-piece outfit, featuring a crop top and a matching skirt. And, of course, it wouldn’t be an Ariana performance without a pair of thigh-high boots to go with it, right? This time, they were as bedazzled as the rest of her outfit.

This wasn’t her first time on the VMAs stage, but it has been two years since she performed “Side to Side” in a pink outfit atop a pink piano with Nicki Minaj by her side. It’s safe to say that her music AND her style have evolved since then. She’s been taking more risks and we’re loving it. And she didn’t just save her fab ‘fit for her audience — she brought her best to the red carpet, as well! Tonight she showed up with Pete Davidson, 24, in a silver dress straight out of a sci-fi movie and a pair of her signature thigh-high boots.

But it’s no wonder she pulled all the stops tonight! Ariana is up for five awards at this year’s Video Music Awards, after all. But whether she wins Video of the Year, Best Pop Video, Artist of the Year, Best Cinematography or Best Visual Effects, she left her mark on the awards show. The singer definitely made herself an artist to remember! 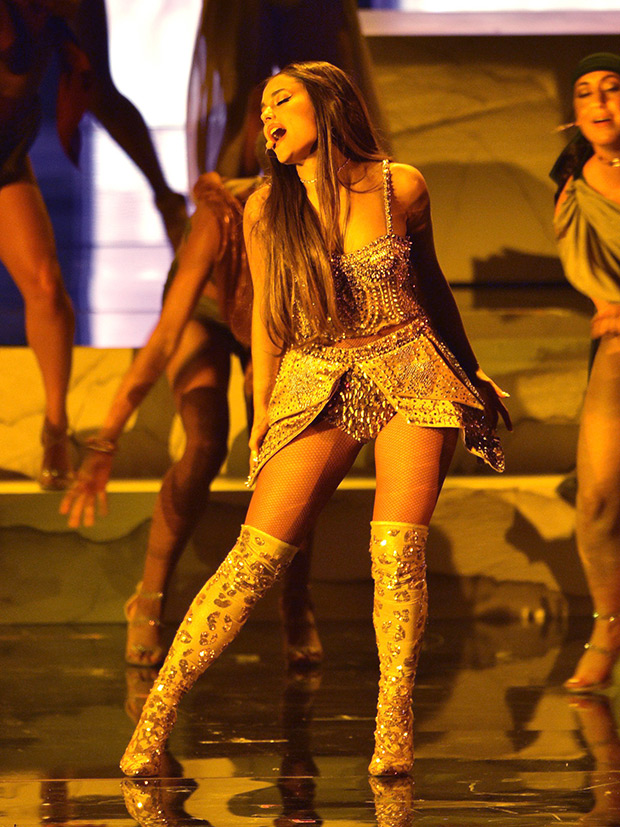 And when you’ve got a vet like Jennifer Lopez taking the stage, as well as other fresher faces like Nicki Minaj and Travis Scott, that’s really saying something!