Photographers caught Sophie Turner crying while out with fiance, Joe Jonas, on Aug. 16, and fans were instantly worried that something was VERY wrong — so the actress took to Twitter to clear things up.

Did something happen between Sophie Turner and Joe Jonas!? That was one speculation was after she was spotted in tears while walking through New York City on Aug. 16! Joe was by her side, guiding her through the busy street with an arm wrapped around her, but fans were worried that something pretty bad had happened to lead Sophie to tears. However, she revealed on Twitter that it was simply a case of PMS. “Thank god I have a loving fiance,” she wrote. “Periods are a b***h.”

Unfortunately, not everyone believed that having her period would really cause Sophie to cry so openly like this. To that, she responded, “Girl…you’ve never had cramps.” Maybe this was all a little too TMI, but we love Sophie for keeping it real! Who wants to deal with cameras in their face when they feel bloated and are dealing with painful cramps?! Luckily, Joe proved to be the perfect gentleman, as he made sure Sophie was protected from the cameras as much as possible and comforted her through the pain.

Joe and Sophie got engaged almost one year ago (Oct. 2017), but they have yet to reveal plans for a wedding. Of course, both stars have been pretty busy lately — she’s been hard at work wrapping up filming on Game of Thrones, while he’s been touring with his band, DNCE, and starring on The Voice Australia. In fact, Sophie even admitted that, while she’s super excited for her wedding, she also finds her career to be very fulfilling. 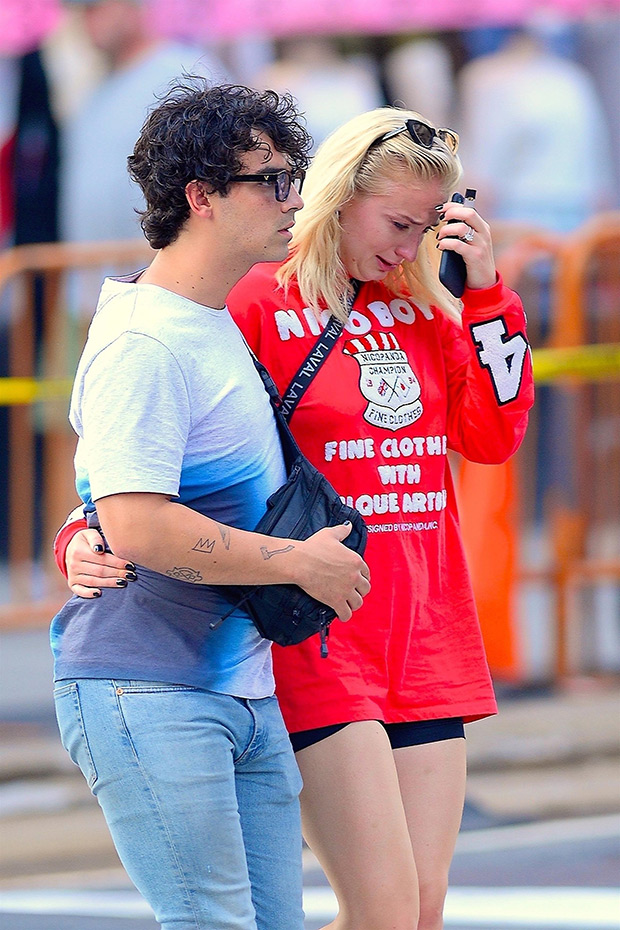 “There’s this misconception that being married is the greatest thing that will ever happen to you,” she recently told Marie Claire. “But I’ve always found that my career is something I work for, and when I achieve something, there’s a sense that this is the greatest thing I’ll do in my life.” Luckily, Sophie has a great dose of BOTH in her life!