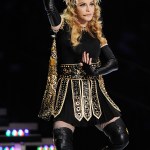 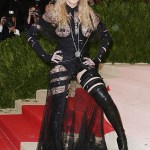 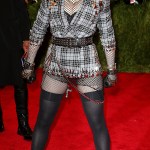 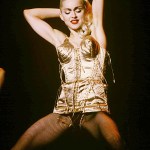 Happy birthday to the one and only Madonna! The Queen of Pop is also the queen of reinvention, and we’re taking a look at her craziest looks of all-time!

Madonna has hit yet another milestone in her life – her 60th birthday! The reigning queen of pop music has a lot to show for her years in the music industry. In 2017, Billboard declared Madonna the “all-time top-performing female artist” in the history of their charts, and Madonna is also one of the highest grossing female artists in America. NBD! But, on top of that, the superstar is known just as much for her iconic fashion looks as her music. Madonna has surprised many times through the years with her risqué and boundary-pushing style choices. Join us in taking a look at the most memorable ones!

Just look at Madonna’s shocking outfit for her 1984 performance at the MTV Video Music Awards! For the legendary “Like a Virgin” performance, Madonna emerged from a 17-foot tall wedding cake and sang her hit in a stunning white wedding dress, a bustier, and a belt buckle which had the words “BOY TOY” scrawled across the front. Scandalous! As the star writhed around on the floor, she exposed her undergarments to the crowd, and the world has yet to forget about Madonna’s over-the-top wardrobe choice from that day.

We really can’t mention Madonna’s fashion without talking about her signature cone bras! While the star has sported her cone bra look more times than one, there was one instance that she really took it to the next level! In 1990, on the “Blonde Ambition” tour, Madonna first unveiled her now iconic cone bra look by Jean Paul Gaultier, in a metallic gold ensemble. The one-piece was slim fitting on Madonna’s body, aside from the two large cones jutting out from her chest. The crowd was shocked when the star stepped out on stage!

In more recent years, let us not forget about the Queen of Pop’s striking look at the 2016 Met Gala. Madonna chose to wear Givenchy, but the designer whipped up a rather raunchy look for Madonna that night! Like a boss, Madonna rocked a COMPLETELY see through lace number, exposing both her butt and breasts. Critics were in awe at Madonna’s sexy wardrobe choice for the always classy event!

For Madonna, age really is just a number! We love looking back at all of the star’s crazy fashion choices, but something tells us she won’t be slowing down on the style front anytime soon. Happy 60th to a living legend!