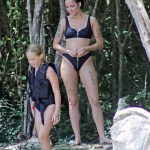 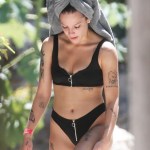 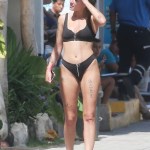 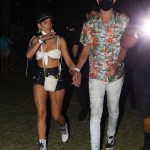 Halsey is soaking up the sun in Mexico! The singer was pictured taking a dip in a black bikini with sultry zippers! See her sizzling swimwear and more of her best bikini photos of all-time!

Halsey, 23, is enjoying some R&R in Mexico with friends in-between her busy tour schedule! The singer, still wet from from a dip in the water, donned a sultry black bikini with silver zippers. She bared her booty in her thong bikini, which showed off her tatted body. Halsey ran her fingers threw her dark-colored hair, which was also still wet, as she soaked up the sun at the the Cenote Tortuga in Tulum, Mexico. — Check out her latest bikini shot, below!

One thing we love about the singer is that she’s comfortable in the skin she’s in! Halsey’s been showing off her bikini bod all summer in different swimsuits, while hitting the beach or the pool any chance she gets. From cut-out bikinis, to floral patterns and different colors, Halsey certainly has swimwear style mastered. And, we’re loving her different hair colors and styles, which compliment her so well. What we’re really trying to say is, Halsey’s the ultimate summer babe!

The single star’s Mexico outing came after she clapped back at haters online who said her natural hair “looked like a wig.” Halsey posted a selfie on August 10, where she embraced her natural hair, writing, “New growth, new growth; all these fades I outgrew.” While many fans were complimentary and supportive of her dark, voluminous curls, others were quick to judge. — That’s when Halsey took to Twitter, writing: “I can’t believe I spent a whole damn year growing out my curls under those wigs for y’all to say my natural hair looks like a wig,” the singer said on Twitter, adding: “Some f*cked up sh*t lmao.”

Halsey swims with friends at the Cenote Tortuga in Tulum, Mexico on Wednesday, August 15.

Halsey also responded to a fan who complimented her, informing that she “worked v hard” to grow out her curls. In another tweet, the singer revealed that she’d been wearing wig recently in order to let her natural hair grow underneath.

Halsey, we LOVE everything about you, girl!