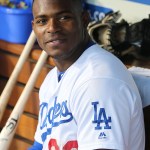 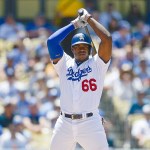 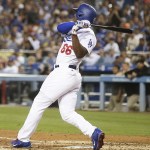 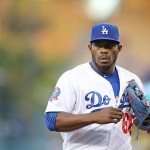 Things got heated between Nick Hundley and Yasiel Puig, sparking a huge brawl at the Aug. 14 Dodgers and Giants game. Watch the shocking video!

The bad blood is real! The Dodgers vs. Giants game took a turn when the teams got into a major fight in the middle of the Aug. 14 game! After Yasiel Puig, 27, fouled a pitch, he got a little frustrated. Nick Hundley, 34, appears to have said something to Yasiel, which caused the Dodgers player to shove Nick in front of everyone. As soon as things boiled over, members of both teams flooded the field to defend their teammates and take it off the field. Everything eventually simmered down, but the tension was alive and well. This is the fourth time Yasiel has been ejected from a game.

Both Yasiel and Nick were ejected from the game as a result of the scuffle. Yasiel explained why he got physical with the San Francisco Giants catcher in a post-game interview. “When I missed the pitch, I knew I thought it was the best pitch that Watson was gonna throw me,” the Cuban-born right fielder said through an interpreter, according to ESPN. “So I was a little upset, and [Hundley] told me to stop complaining, get back into the box. And when I got in his face, he told me to also get out of his face. So that’s when I got upset.” He also added that Nick said “some words to me in English that I really can’t repeat.”

Nick didn’t think too much of the shocking fight. “We had some words and pushed a couple times,” he said, according to ESPN. “There’s really not more to it than that.” At least he’s ready to move on and learn from it! The Giants ended up beating the Dodgers 2-1.