Hot mama! Kylie Jenner slayed in the sexiest latex bodysuit while out and about with boyfriend Travis Scott on Aug. 13. The couple were holding hands in a rare public appearance together. Check out the photos!

Stop everything. Kylie Jenner, 21, and Travis Scott, 26, have officially taken over Calabasas! The couple were spotted holding hands while taking a trip to a Polacheck’s Jewelers just days after Kylie celebrated her 21st birthday. Maybe Travis was getting her another birthday gift?! Kylie was wearing a super tight latex bodysuit and black jeans. The bodysuit was so tight you could see the outline of her bra just a smidge. Stormi Webster’s parents decided NOT to take Kylie’s new Rolls Royce out for the shopping run.

Kylie is still sporting that platinum blonde wig she donned for her 21st birthday, which was Aug. 10. Travis couldn’t keep his hands off the mother of his child at her birthday party. He nuzzled her neck as she sipped on an adult beverage in one video. He was by her side the whole night! However, fans were a little concerned when Kylie was seen drinking out of a “single AF” yellow cup at her party. Kylie is definitely not single, people. She’s happy and head over heels for the rapper! 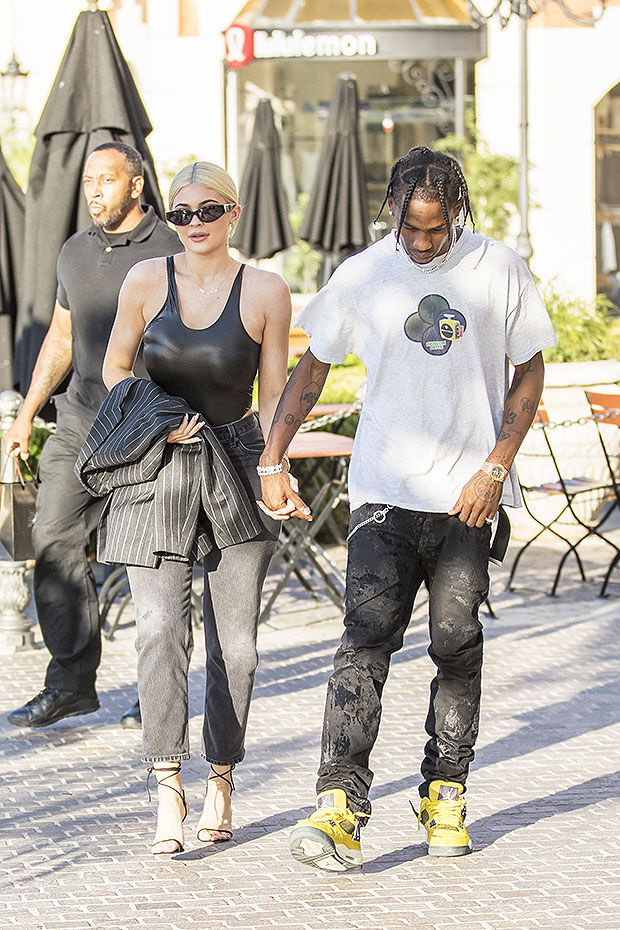 Travis likes to keep his relationship with Kylie private, but he did post the sweetest message on his love’s birthday. “Happy bday wifey I love u mommy u my heart rib toes and all,” he wrote on Instagram. “May GOD continue to bless u and ur spirit. This mark in ur life is the start to more greatness.” Kylie also played the Virgin Mary in Travis’s music video “Stop Trying To Be God.” Slowly but surely, this is becoming Kylie and Travis’s world, and we wouldn’t have it any other way.