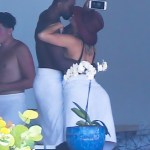 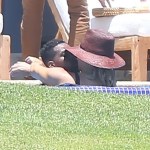 Khloe Kardashian hinted that her romance with Tristan Thompson was ‘complicated’, while celebrating Kylie Jenner’s birthday, but is that really how she feels?

Khloe Kardashian, 34, can’t believe that a cup can’t just be a cup. The reality star shrugged off the idea that her choice of a drinking cup at sister Kylie Jenner’s, 21st birthday party sent off a signal to the world that her relationship with Tristan Thompson, 27, was “complicated” all because of the color-coded system Kylie had instilled at her party on Aug. 9. The always candid Kardashian took to Instagram on Aug. 13 to shrug off such a theory, when she said, “People are reaching. I ordered a drink, it came in a cup, I drank it. End of story. Not that deep lol. I’m sure I drank out of every colored cup that night.” The message was picked up by the Instagram account CommentsbyCelebs and later shared on their feed. Only the Kardashians can create drama out of a plastic cup, right?!

We can’t blame those who speculated on the meaning of the cup though. On April 12, a video, which was obtained and released by TMZ, featured Tristan cheating on Khloe with two women at a New York nightclub. Immediately after the video emerged, there was a massive outcry from Khloe’s fans who begged her to kick him to the curb. Khloe and Tristan share custody of their 4-month-old daughter True, and they’ve made an effort to co-parent since the scandal, but neither party has declared what their current relationship status is. However, that hasn’t stopped the two from carrying on as if everything is back to normal. Tristan wasn’t at Kylie’s birthday party on Thursday evening, but he and Khloe shared a Snapchat of them kissing on a dance floor at a nightclub on August 10.

Perhaps all of this points to a reconciliation. And Tristan seems to understand how his actions have affected Khloe, as a source told People, “he’s finally realizing how much he hurt Khloé.” The two are even in couples therapy, the outlet further claimed recently, so that could help them get over his cheating too. While Khloe’s choice of cup might not have been intentional, we can understand why fans became alarmed.