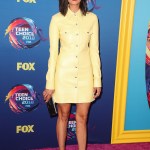 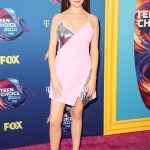 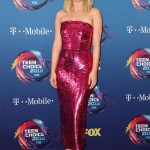 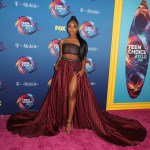 Meghan Trainor & so many stars showed up for the 2018 Teen Choice Awards! Check out all of your favorite celebs who made an appearance at one of entertainment’s biggest events here!

Katherine McNamara stunned in a sexy outfit, a crop top with matching shorts, while walking the red carpet for the 2018 Teen Choice Awards outside the Forum theater in Los Angeles. However, she wasn’t the only star who wowed with her red carpet look. Noah Cyrus also looked gorgeous as well! Meanwhile, Meghan Trainor showed off major cleavage in a glittery black ensemble! Seriously, it was such a night to remember, fashion-wise! While you try to pick which outfit was your favorite, check out all of the pretty red carpet arrivals at the 2018 Teen Choice Awards in our gallery above!

This evening will prove to be a night of contentious competition as so many of music, TV and film’s biggest stars are pitted against one another. For instance, Bruno Mars, Drake, Ed Sheeran, Louis Tomlinson, Niall Horan and Shawn Mendes are all up for Choice Male Artist. But this isn’t the only category totally packed with talent. Meanwhile, Ariana Grande, Camila Cabello, Cardi B, Demi Lovato, Dua Lipa and Taylor Swift are similarly nominated for Choice Female Artist. Who will go home a winner and who will walk away empty-handed? Time, and not a lot of it, will tell! The show starts at 8pm EST on Fox!

However, not everyone will be in attendance tonight. Stars like Millie Bobby Brown and Ariana will both be absent for the evening’s festivities — but don’t worry, they have good reason to do so. Millie is currently busy filming the third season of the hit Netflix show Stranger Things, which started up production again in April. And as for Ariana, her schedule is equally swamped! We’ll keep you posted on who does decide to show up to tonight’s big event!