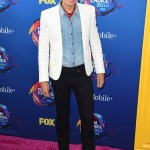 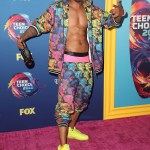 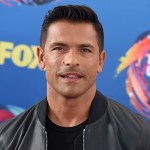 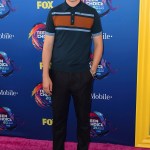 The dudes are looking good on the Teen Choice Awards red carpet! From KJ Apa to Khalid, check out all the best men’s fashion moments ahead of the show!

Hoo boy! The Teen Choice Awards air tonight, and some of your favorite male celebrities like KJ Apa and Cole Sprouse have landed on the red carpet in colorful button-downs and funky t-shirts. Let’s take a moment to admire all these dudes’ looks, shall we?

Shadowhunters star Matthew Daddario arrived on the carpet early, and looked effortlessly cool in a collared navy shirt that featured a design of people standing in water under the moon. He paired the unique top with dark jeans and slip-on shoes for a casual look that still looked dressy enough for the red carpet.

Nick Cannon made a lasting impression on the red carpet. The show host went shirtless under a multi-colored open printed jacket which was coordinated with his pants. He finished the wild ensemble with bright yellow sneakers. Cannon, who has been nominated for nine surfboards over the years, is just getting started though! For his hosting duties, he’ll likely make a few bold moves during the event, which will also certainly land some laughs. “I like to attack everything in a comedic way if possible,” the Wild ‘N Out star told The Hollywood Reporter. “Nothing’s off-limits.”

Politics are one of the things that aren’t out of bounds for Cannon. He explained that he’ll be amplifying the issues teens care about throughout the event. “If you live in this world, you’re political. It’s more about social commentary. The youth definitely love to voice their opinions and utilize their voice when it comes to any topic, so I’m going to definitely reflect that. We need it,” he explained. But don’t worry – things won’t get too bleak. “It’s going to be one of those fun, wild summer shows. I’m going to collaborate with my co-host [LeLe Pons] and do some fun, silly stuff with her.”

Get clicking through the gallery above to see more of the best men’s fashion moments on the red carpet! The Teen Choice Awards air Aug. 12 at 8 p.m. EST on Fox.