The wait is over for Travis Scott’s newest sneaker collaboration with Nike! The rapper drops his latest shoe, the Nike Air Force 1 Sail, on August 10, and the retailers have been announced! Here’s exactly where you can purchase them!

Travis Scott, 26, and Nike have done it again! The collaborators, which some have dubbed a match made in shoe heaven, are on the brink of releasing their new Air Force 1 Sail shoe. The newest footwear will hit the worldwide market this Friday, August 10, at select Nike retailers, as well as online on nike.com for the price of $150. As for where you can cop a pair of Sail’s? — The following U.S. retailers will carry the new shoe: Kicks USA, SNS, RSVP Gallery, Foot Locker, Footaction, Lapstone & Hammer, Rock City Kicks, Social Status, Bodega, KITH, Shoe Gallery, Livestock, Extra Butter, Saint Alfred, Mine Brooklyn, Concepts, Packer Shoes, Shop Nice Kicks, Wish ATL, UBIQ, Phenom, FCFS and UNKNWN.

The “Sail” features a low-top style structure with a canvas upper and gum sole. The silver Swoosh branding is conveniently removable and the laces are accessorized with Cactus Jack patches and a deubré that obviously takes inspiration from the rapper’s signature grill. The Nike Air branding on the heels has been inverted. Travis’ latest shoe comes after the popular and very successful release of his Air Force 1 last year (2017), which included custom inserts and replaceable Swoosh logos, as well as a Houston Oilers-inspired take on the iconic Air Jordan 4.

The major sneaker buzz comes after La Flame celebrated his girlfriend, Kylie Jenner‘s 21st birthday on August 9 in LA. The new parents, who welcomed their first child together, daughter Stormi Webster in February, stepped out for a star-studded date night to ring her milestone birthday, starting at Craigs in West Hollywood. The pair, along with Kylie’s famous family later headed to Hollywood hotspot Delilah, where they sipped on adult cocktails and danced the night away. The K-sisters made sure to document their wild night out, looking stunning of course. 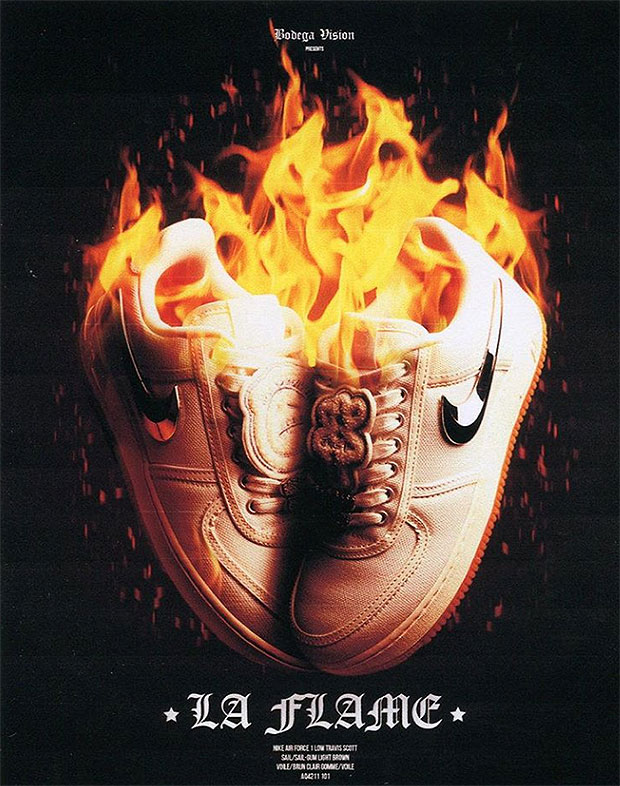 The “Sail” also comes after the successful release of Travis’ third full-length studio album, Astroworld, which features collaborations with Drake, 20, and The Weekend, 28.