As adorable as King and Heiress were in the sweet videos Tiny posted of their perfect pool day, we couldn’t help noticing their dad was MIA. What’s the deal?

Tameka “Tiny” Harris, 43, just gave followers a sneak peek of some summer fun with kids Clifford “King,” 13, and Heiress Harris, 2. The only thing that could possibly have made their family pool day cuter would have been an appearance from everyone in the family. Ahem, T.I., what gives? The 37-year-old rapper was noticeably absent from the series of videos Tiny posted to Instagram on August 9. But since a new episode of his show The Grand Hustle came out on BET last night, we’re hoping he was only missing because he was busy promoting or filming. We’ll give him the benefit of the doubt! Because even though he and Tiny were on the rocks for awhile there, all signs have been pointing to a healthy reboot of their relationship. He did just send her massive flowers for their eighth wedding anniversary, after all!

We hope all is well with Tiny and T.I., especially for their kids’ sake! The couple have three children together — King, Heiress and Major — and two of them were together and having a blast in the videos their mom posted. King and Heiress started out singing songs on a trampoline from “No More Monkeys Jumping on the Bed” to “Ring Around the Rosy.” Consider our hearts officially melted! From there, the kids took their fun to the playground where Heiress took a bow and proceeded to chase her big brother around in a game of hide and seek. “King will do anything for his lil sis,” Tiny wrote, and he proved that to be true when he played with her in the pool next. As if their summer fun wasn’t already adorable enough!

The siblings seem to have such a sweet bond. We could have watched them run around the backyard all day long and only wish T.I. had joined the party. 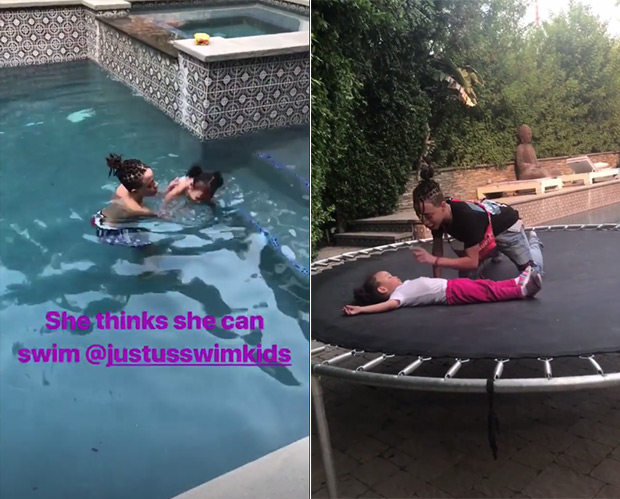 But hey, at least all ten of Tiny’s videos were featured on her Instagram story so her hubby could watch just like the rest of us. We know Tip loves his little ones!