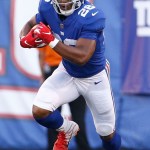 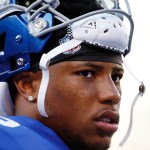 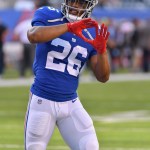 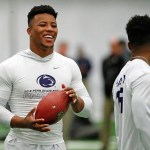 NY Giants rookie running back Saquon Barkley is getting the nickname Saquon Fartley after allegedly passing gas in the team’s preseason opening game. We’ve got the video.

New York Giants rookie running back Saquon Barkley had a stellar performance in his first game as an NFL pro. In his first carry, he ran for 39 yards, breaking tackles and taking his team downfield. Unfortunately he’s also been accused of breaking wind in a video that’s gone viral that appears to show him passing a massive amount of gas during the game, so much that it blew the towel on the back of his pants up into the air. Of course this could have just been a passing breeze that lifted it up, but the internet is still having fun with the prospect that it was a massive fart.

The 2018 NFL draft second overall pick is seen bending down with his hands on his knees getting ready for a play when an updraft sends the towel skyward for a brief moment. The website The Checkdown then made the moment viral with the comment “Must be the beans in pregame” underneath the clip. Then Saquon’s teammate, safety Landon Collins retweeted it, calling more attention to the possible epic flatulence.

Must be the beans in pregame. pic.twitter.com/bJ0qjKHcgH

There’s a damn fine reason the running back out of Penn State went so high in the draft. He’s got incredible athleticism, a positive work ethic, and his electrifying first play in the NFL didn’t come as a shock to his teammates. “It was awesome, but I don’t think anyone was surprised,” linebacker Mark Herzlich told the NY Post. “You didn’t see anybody say, ‘Oh my gosh.’ He is the real deal. We know he’s the real deal. He’s just showing everybody else now.” Saquon’s massive opening run as an NFL pro has already been viewed over two million times on NFL.com.