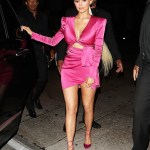 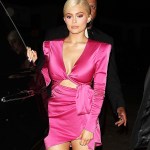 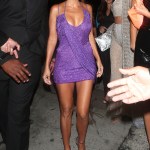 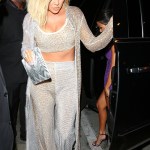 Kourtney Kardashian and ex Scott Disick were spotted sitting next to each other at Kylie’s 21s birthday. Kim even joked that they were like an ‘old married couple,’ which is totally a dig at Kourt’s other ex, Younes!

This is a reunion of epic proportions. Kim Kardashian, 37, posted a video on her Instagram Story of Kourtney Kardashian, 39, and Scott Disick, 35, sitting side-by-side at dinner while celebrating Kylie Jenner’s 21st birthday in West Hollywood on Aug. 9. “Oh, just like an old married couple. On your phones…” Kim says in the video. Khloe Kardashian, 34, also shared Snapchat video of Scott and Kourtney sitting together and wrote, “A girl can dream.” It’s clear that Kim and Khloe are hoping Scott and Kourt rekindle their on-again, off-again romance!

Kim and Khloe’s comments also seem to be their way of shading Kourtney’s ex, Younes Bendjima, 25. Kourtney and Younes’s split was announced on Aug. 7 in the wake of photos surfacing of Younes cuddling up to Justin Bieber’s ex, Jordan Ozuna, in Mexico. HollywoodLife learned EXCLUSIVELY that Younes is denying that he ever cheated on Kourtney, but the mom-of-three had “enough evidence to believe that he was not being faithful.”

Scott’s current girlfriend, Sofia Richie, 19, was also nowhere to be seen at Kylie’s birthday. However, she was spotted heading to dinner alone at Nobu in West Hollywood while Scott and Kourtney had dinner together with the rest of Kylie’s guests. Kourtney looked dynamite in a plunging purple mini dress that showed off her incredible body.

I love them 😂 #kourtneykardashian #kimkardashian

A girl can dream 💋#kourtneykardashian #scottdisick

HollywoodLife also found out EXCLUSIVELY that Sofia has been “freaking” out and “feeling less secure” about her relationship since “Scott and Kourtney have been talking more frequently since her split from Younes.” While Scott and Kourtney do share three kids together — Mason, 8, Penelope, 6, and 3-year-old Reign — Sofia has noticed that they exes are talking more about Kourt’s breakup lately than the kids. To top it all off, a source told HollywoodLife EXCLUSIVELY that Scott is “happy” Younes is “out of their lives. Could this be the start of Kourtney and Scott possibly getting back together in the future? Things just got a whole lot more interesting in the Kardashian universe!