Every single sister looked hot, hot, hot for Kylie Jenner‘s 21st birthday party on August 9. Kim Kardashian jokingly asked fans, “Hmmm what should I wear tonight?” on her Instagram, while sitting on the floor in just a bra and panties, in front of a rock of neutral clothes. She definitely traded her muted Yeezy wardrobe for a bright and bold custom Yeezy look for Kylie’s birthday! She wore a pink satin mini dress with a large cut-out at her super small waist. Kim recently revealed she weighs 119 pounds, and now, she’s showing off her body! She even hit the gym at 8:30am the day after the party!

Kim’s husband Kanye was casual in a white tee and army green cargo pants. Kylie wore two pink outfits for the special occasion — she wore a sequin unitard and then the DUNDAS D5 short pink satin dress, which has a “twisted bust drape and a sashed pareo skirt.” Khloe Kardashian showed off her flat abs after giving birth in April, wearing a sequin crop top, pants and matching jacket. Kourtney Kardashian stunned, showing off her cleavage in a tiny purple mini dress. Kendall Jenner showed off her mile-long legs in a black strapless mini dress. Kris Jenner wore a black jacket and pants, and carried a Gucci purse. 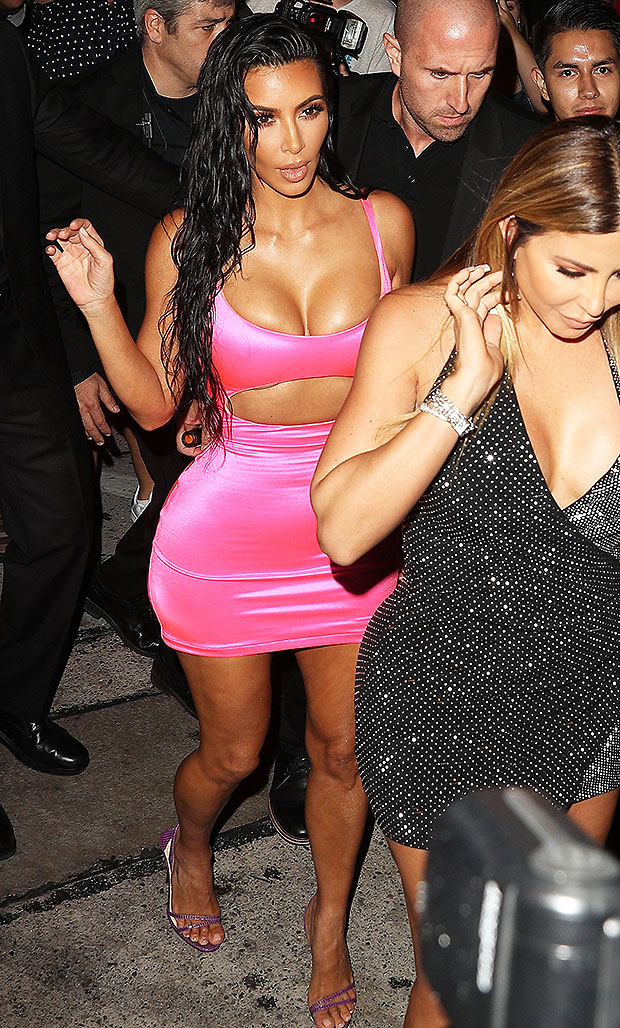 The party was a star studded affair. Everyone from Larsa Pippen to Nicki Minaj to Dave Chappelle was there, and it was a bit of a family reunion as well.Kourt’s ex Scott Disick as well as Caitlyn Jenner were also on the invite list.