Isabela Moner is ready for a new adventure as the live-action Dora the Explorer. Isabela looks identical to the live-action version of the beloved animated character! See the side-by-side now!

Isabela Moner, 17, was clearly the perfect choice to play Dora the Explorer. She looks exactly like the Latina character with Dora’s signature pink shirt, orange shorts, short brown hair, and purple backpack, of course. In the hit Nickelodeon series, Dora is just a kid, but she will be a teenager in the live-action movie. Production has already started in Gold Coast, Queensland, Australia. This will be Dora’s big screen debut! How exciting! The iconic TV series ran from 2000 until 2014.

The live-action movie’s synopsis reads: “Having spent most of her life exploring the jungle with her parents nothing could prepare Dora for the most dangerous adventure ever – High School. Always the explorer, Dora quickly finds herself leading Boots (her best friend, a monkey), Diego, and a rag tag group of teens on a live-action adventure to save her parents and solve the impossible mystery behind a lost Inca civilization.” 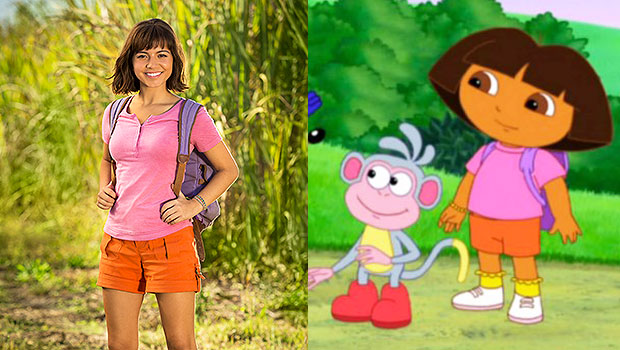 Isabela is best known for her role in the Nickelodeon series 100 Things To Do Before High School and the movies Sicario: Day of the Soldado and Transformers: The Last Knight. Paramount will release Dora the Explorer on August 2, 2019. We are so ready for Dora’s next exciting adventure!