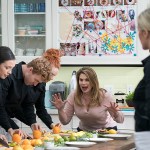 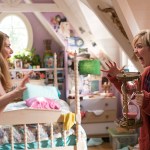 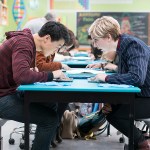 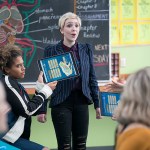 The DCOM ‘Freaky Friday’ premieres Aug. 10, and HL spoke EXCLUSIVELY with the movie’s stars about bringing the story to TV, the movie’s important messages, and the big mother-daughter transformation!

We all know the Freaky Friday movies, including the one starring Lindsay Lohan and Jamie Lee Curtis, but did you know Freaky Friday is also a musical? Heidi Blickenstaff played Katherine in the musical’s original stage production, and now she’s taking the role to TV for the all-new Disney Channel Original Movie. “I’ve never done anything like that before, and it was definitely a big transition,” Heidi told HollywoodLife EXCLUSIVELY at the movie’s junket. “Luckily, I was so supported by the greatest people, both our offstage creators, our director Steve Carr, and everybody that was so lovely and generous to me behind the scenes. But also, I had this one [looking at Cozi Zuehlsdorff]. She’s younger than I am, but she’s a veteran of doing movies, and she’s such a wonderful TV and film actress that I would often match my performance. Like, if I didn’t know what I was doing, I would look at her to get the temperature of this and follow her because she knows what she’s doing. She’s been on camera since she was 7. And so I had so much great support and really it was just a matter of, like, I know how to act, but I’ve never done it for film before, so it was just a matter of kind of recalibrating things a little bit and clicking things down a little bit.”

Heidi and Cozi play the mother-daughter duo of Katherine and Ellie the DCOM musical. The mom and daughter are constantly at odds, but when a magical hourglass breaks and they swap bodies, they must repair their relationship before they can switch back. The movie is relatable on so many levels, and both Heidi and Cozi open up about the movie’s messages they loved the most.

“I really, really, really love the compassion that our movie puts forward because I think we live in a time right now where we could all use a little more compassion for our neighbor,” Heidi said. “Even though this is specifically a mother-daughter relationship, [and] getting back in touch with the love and compassion they once felt for each other, I really think its something I took away from me in my real life and try and think about other people a little bit more.” Heidi followed up with, “The body positivity message was my personal favorite, but also the idea that if you’re just… if we were, like, we’re going to press this message, it would have been like, ‘Stop the story. Here’s the message.’ The fact that you said there are so many I think just speaks to the fact that in real life there are so many things that we come across that we deal with.”

The Disney Channel movie also includes some amazing musical moments: “Just One Day,” a duet by Katherine and Ellie that reveals the distance they feel between each other; “I Got This,” when Katherine and Ellie start their crazy day in each other’s shoes; “Oh Biology,” a song about the changes experienced by adolescents; “Go!,” a fun and fast-moving ensemble number that unfolds during the exciting competition of “The Hunt”; and “At Last It’s Me,” an original pop song performed by Cozi. Freaky Friday premieres at 8 p.m. on Disney Channel.