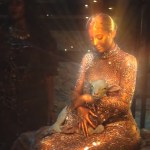 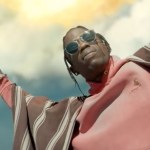 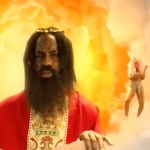 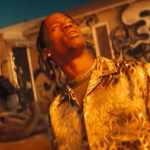 You’ve never seen Kylie Jenner like this before! In Travis Scott’s music video for ‘Stop Trying To Be God,’ his baby mama transforms into an ethereal angel — watch, here.

Now we know how Travis Scott, 26, really sees his girlfriend Kylie Jenner, 20 — as a golden angel descended down to Earth straight from heaven. If that’s not a hint that he’s ready to pop the big question, we don’t know what is! The rapper dropped the music video for his new track “Stop Trying To Be God” on Aug. 6, and it’s filled with Biblical allusions, flames and a lot of sheep. Luckily, Travis has an angelic Kylie to hold him amidst all the destruction. After watching this music video, we’d listen to any revelations the Angel Kylie would have to say if she came floating through our windows.

In the music video, the Astroworld rapper is lying in pain, but an alloy Kylie embraces him as smoke and flames engulf the screen. Later, the Keeping Up with the Kardashians star gets solo screen time in rap music’s parallel to the Nativity scene! Towards the end of the video, Kylie dons a hand beaded gown by AMEN as she sits on a wooden crate, cradling a lamb. The baby Jesus must’ve exceeded the music video budget, but a lamb was a fine substitute – after all, in the Bible, Jesus was called the “Lamb of God.” So was Travis comparing his baby momma not just to an angel, but Mother Mary herself? After all, Kylie did just give birth to his daughter Stormi on Feb. 1, whom also gets a shout out in the lyrics of his Astroworld track “Sicko Mode feat. Drake.”

Whatever the inspiration is behind Kylie’s heavenly makeover, one fact is confirmed: She looks absolutely stunning. We mean, come on, literal light beams are shooting out of her! We’re finally seeing Travis’s vision of his beloved girlfriend come to life. We didn’t realize he’d take his lyrics from his new track “Stargazing” so literally! In the song he raps, “I was always high up on the lean (yeah, yeah) / Then this girl came here to save my life / Look up to the sky, down on my knees (straight up) / Out of nowhere, you came here to stay the night / In the night-time (woo, yah).”

We think this tops the list of best cameos a singer has given his or her girlfriend/boyfriend in a music video. This is certainly a step up from Kylie’s role as a zombie in ex-boyfriend Tyga’s music video “Dope’d Up” back in 2015.