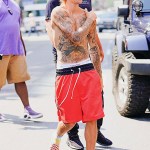 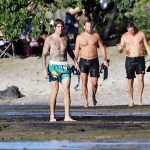 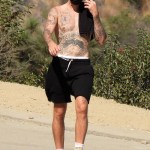 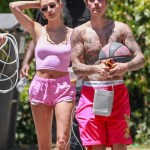 Justin Bieber tried to beat the sweltering New York heat by stripping off and walking around the city topless. He showed off his buff, tattooed chest on the rare occasion he was without fiancee Hailey Baldwin.

Justin Bieber 24, knows how to cool off during a heat wave. On Aug. 7 he walked around New York, shirtless, flaunting his tattoo-covered chest as temperatures soared to 89 degrees. These days it’s rare that he’s seen without fiancée Hailey Baldwin, 21, by his side. This summer New Yorkers have become used to seeing the model and the pop star pack on the PDA whenever they’re out and about, especially since he confirmed their engagement on July 9. But, on this occasion, photographers captured him strolling through the city solo.

When Justin and Hailey have been photographed together they’ve turned the most everyday tasks into a smooching session. Having lunch at a restaurant while making out? Check. Kissing and cuddling in the middle of the street while New Yorkers walk around them? Of course! They’ve even turned grocery shopping into a way to display their love. On July 26 Justin and Hailey were pictured at City Acres Market in Brooklyn looking lovey-dovey. An eyewitness told HollywoodLife EXCLUSIVELY, “Justin and Hailey didn’t leave each other’s side while purchasing several items. They looked comfortable and sweet together even as they did simple grocery shopping. She was smiling and seemed proud to be with Justin.”

That’s no surprise given that a source close to Hailey EXCLUSIVELY told HollywoodLife that she loves being engaged to Justin. The person said, “Hailey is having a lot of fun with the word fiancée. She loves being engaged to Justin and gets giddy almost every time she says it. She still can hardly believe that Justin is really her fiancé and will soon be her husband! She says that’s going to be even crazier to get used to, calling Justin her husband.”

Life isn’t all smooth sailing for Jailey though. On Aug. 7 the paparazzi also caught Hailey looking teary-eyed and emotional as Justin held her face in his hands. We hope they’re OK, because whatever they were discussing looked very intense!