Iggy Azalea, 28, just proved she’s got reflexes like a cat! The rapper was able to quickly cover up after her bikini top suddenly let loose and fell! Before her breasts could have been exposed, Iggy swiftly wrapped her black beach coverup over her front as friends close by chuckled over the wardrobe malfunction. And, she was a good sport about the bikini mishap too! She was pictured mid-coverup (as seen below) with a massive smile on her face, which we’re guessing was courtesy of the thought that things could have been a lot worse!

The blonde bikini babe was returning from a day of yachting with friends in Miami’s South Beach on August 6. She made sure to document her day of partying on a luxury sailboat, gracing her millions of followers with multiple bikini videos. On her Instagram stories, Iggy showed off her rockin’ bod in a multicolored animal-print bathing suit. She even twerked in one video, where she put her assets on full display, busting it down on the yacht.

Just one day prior to her twerk show, Iggy was photographed with rumored boyfriend, Tyga, who she most recently collaborated with on their hit, “Kreme”. Iggy and T-Raww were spotted boarding a yacht in Miami on August 5, with friends. She looked sizzling hot in a maroon body-con dress with a matching fanny pack around her waste. Meanwhile, T kept it casual in a white tee with bright, neon green shorts, and his signature silver chain. 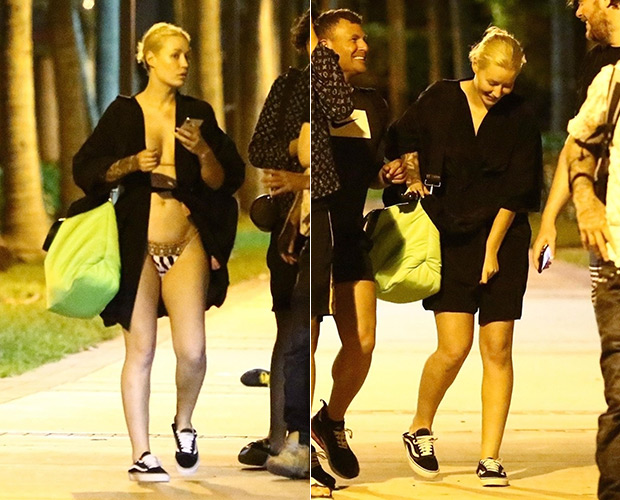