Becca Kufrin just merged ‘The Bachelorette’ and ‘Game of Thrones’ in the most epic way to tease the August 6 finale of her quest for love! See the telling ‘GoT’ reference that has Bachelorette fans in awe!

Becca Kufrin, 28, is the ultimate TV fan! Not only does she entertain us week after week on her quest for love as the Bachelorette, but she’s a real-life TV junkie. “Just awaiting my Jon Snow to bend the knee,” she captioned an Instagram post ahead of The Bachelorette finale, which airs tonight (August 6) on ABC. “Only two more days until the real beginning of this lurve journey. How are we already here?!,” she continued.

Becca’s captioned clearly (if you’re a GoT fan) paid homage to the show’s fictional King of the North, Jon Snow, played by Kit Harington. While Becca’s reference isn’t an ode to any physical similarities between Snow and her final two, Garrett Yrigoyen and Blake Horstmann, her caption was still very telling. Her usage of “bend the knee” — a quote referencing a real life proposal — is also used in the popular HBO series. In Westeros, “bending the knee” is is a proper gesture of submitting to a ruler, to signify loyalty. And, GoT fans all know (spoiler ahead) that Jon Snow did indeed bend the knee to Daenerys Targaryen, played by Emilia Clarke, during the sixth episode of the seventh season of GoT. Now, while Jon couldn’t physically bend his knee because he was injured, he instead, vocally proclaimed to doing so with Dany at his side.

The future Mrs (we don’t know yet) posted two photos from the finale, which both show her standing alone in a white, embellished gown in front of a blue ocean in the Maldives, where the finale takes place. In the snaps, she’s awaiting the man she is currently engaged to, with one last red rose in her hands. While many fans were focused on Becca’s stunning finale photos, it was her GoT caption that had fans declaring her as the best Bachelorette” in the comments section! 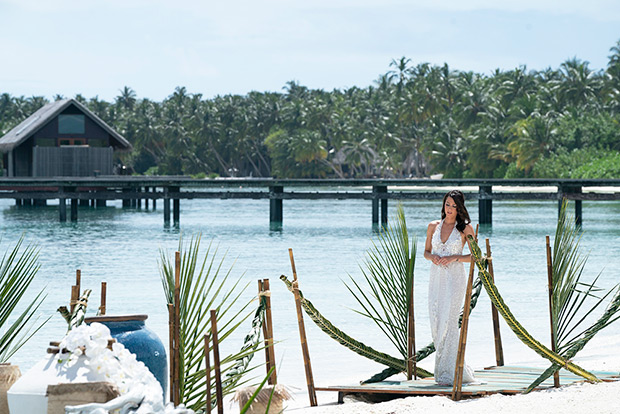 The season 14 finale of The Bachelorette airs on Monday at 8 PM ET/PT on ABC. And, it’s not the end for franchise fans, as Bachelor in Paradise kicks off its fifth season on Tuesday, August 7!