Whoa, whoa, whoa. Nikki Bella and John Cena were spotted all smiles on vacation just days before the Bella twin announced they were ‘officially over.’ What is going on?!

Nikki Bella announced she and John Cena had officially ended things after months of back and forth that suspiciously lined up with the timing of their drama-filled season of Total Bellas. Well, just days before Nikki said the two were done for good, she and John were spotted smiling and happy together on a family vacation. The pair were vacationing in Lake Tahoe and in fan photos with John, Nikki is seen in the background rocking the same hat she’s wearing in her personal pics from the weekend — where John is no where to be seen, according to The Blast. Then, the Bella family posed for a picture on the water that John seemingly ducked out of, but later in the weekend, video footage obtained by the outlet revealed the beefy wrestler joining the fam for a fancy dinner.

This suspect vacation comes months after the rollercoaster of confusion that is Nikki and John’s relationship. John and Nikki started dating in 2012, and inApril 2017, he proposed to her in the ring at Wrestlemania 33. Then, just weeks before they were due to marry on Cinco de Mayo of this year, the pair abruptly called off the nuptials and spoke very little about what went down, referring to their E! show Total Bellas, which would show the whole drama. As the show premiered and played out, the confusion continued and after both Nikki and John made public statements about their hopes to reconcile, they appeared to get back together in June. Then, Nikki took to YouTube to share an update on their relationship in early July, telling fans the two were “just friends” and taking time apart while he was filming a movie in China. However, that break was clearly short-lived, as John returned to the U.S. for this secret vacation with the Bella family in mid-July! 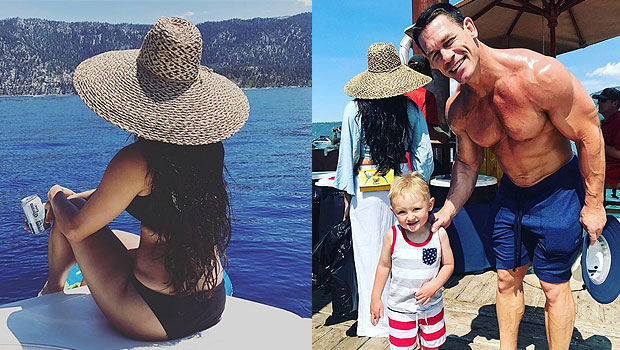 Then, on Monday, July 31, one day after the Total Bellas season finale, Nikki told People that she and John were officially done. “After I called off the engagement, we tried to work on our relationship to get back to where it was, and in order to move forward with our wedding. After much time and soul-searching alone and together, we have decided to officially part ways,” she said. “I have the utmost respect for John, but I know this is what’s best for me.” Yes, we’re just as confused as you are, but we’ll just have to wait and see what happens on the next season of Total Bellas.