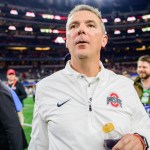 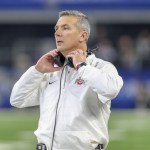 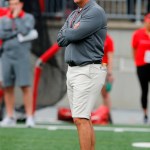 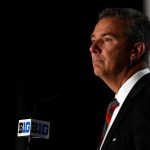 Urban Meyer claims he didn’t know about his assistant, Zach Smith, allegedly abusing his wife in 2015, but Courtney Smith says she told the Ohio State coach’s spouse all about the alleged domestic violence.

A scandal is unfolding out in the Buckeye state. OSU coach Urban Meyer, 54, has been put on paid leave as the university investigates if he was indeed aware of a 2015 incident of domestic violence between his wide receivers coach, Zach Smith, and his now ex-wife, Courtney Smith. Urban claims he had no idea about the alleged abuse, but Courtney says she told his wife all about it. “In 2015, I spoke to Shelley [Meyer],” she said in an interview with Stadium. “I sent her some pictures. I spoke to her on the phone.”

“At that point, we were legally separated and enough is enough. If I leave the marriage, I’m hoping this is going to stop. This has to stop,” she added, per Yahoo! Sports. “Shelley said she was going to have to tell Urban. I said, ‘That’s fine. You should tell Urban.’ We can’t have somebody like this coaching young men.” However, Courtney said she never got confirmation that Shelley told her husband about the alleged domestic violence.

“She would reach out to me, ask me how I’m doing, tell me she’s worried and that if I needed anything she was there,” Courtney said. “When somebody is crying out for help, I believe the coach and the coach’s wife have a duty. They have a duty to do something. To help. Instead of worrying about winning games or instead of worrying about who his mentor is and who his (Zach’s) family is and trying to protect that, somebody’s safety, the safety of their children and the environment that they’re in needs to be more important.”

If Courtney’s allegations are confirmed, then the Meyers could be in violation of Title IX’s policy on reporting allegations of domestic violence against university employees (as Shelley is a registered nurse and an instructor at the University, according to Fox News.)

Courtney, in an interview with college football reporter Brett McMurphy, also shared screen shots of text messages between her and Shelley, according to DeadSpin. “I am with you!” Shelley told Courtney. “A lot of women stay hoping it will get better. I don’t blame you! But just want u to be safe. Do you have a restraining order? He scares me” “Restraining orders don’t do anything in Ohio,” Courtney responded. “I tried to get protection order which is what started this whole investigation. And that should go through soon finally. It’s hard bc you have to prove immediate danger. Legal system is tough. Basically you have to prove he will kill u to get protective order”

Zach was fired on July 23, per Sports Illustrated, after a report revealed that Courtney had filed an order of protection against him, per Sports Illustrated. Zach has at least two domestic violence incidents. Zach was arrested in 2009 (when he was a member of Urban’s staff at Florida) for aggravated battery of his wife, who was two-months pregnant at the time. No charges were filed. In October 2015, Zach was arrested for felonious assault and domestic violence against his ex-wife. He was charged with misdemeanor criminal trespassing in May 2018 after he dropped off his and Courtney’s son at her house, after she told him they would meet elsewhere. He pleaded not guilty.