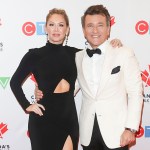 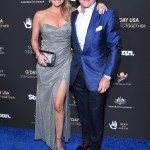 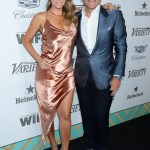 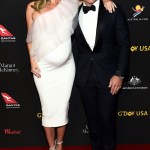 Kym Johnson, 41, is already back in shape! The first-time mom hit the pool with twins Haven Mae and Hudson Robert and posted the adorable family picture to Instagram on Aug. 1. While we think her babies’ teeny polka dot and striped onesies are adorable, we can’t help noticing their mom’s even tinier bikini! Three months after giving birth on April 23 Kym already looks ready to do the salsa with her noticeably flat stomach. Kym captioned the photo, “Double trouble at the pool 👶👶 #3monthsold #firstswim.”

This is impressive given Kym gained the most weight on her tummy during her pregnancy! “After I have the babies, I’ll take my time getting back. I haven’t gained too much weight on my arms or my legs,” Kym told People back in April shortly before giving birth. “It does seem to be my belly.” It was probably all those post-baby workout sessions at her dance fitness studio, The BOD in Beverly Hills, that helped her shrink her tummy! The DWTS pro didn’t stop “dancing” and “moving” even while she was heavily pregnant!

And for moms worried about hurting their babies while they’re still in the womb, Kym has another secret – low impact exercises. “During my first trimester they advised me not to do anything, so I stopped. Then in the second trimester, after I was in the clear, I resumed teaching classes and doing prenatal Pilates,” Kym shared in an interview with the Australian Mother & Baby Magazine. “I find it really good for my legs and my arms as it is low impact which is nice. I think staying active and moving has helped me. I think the babies have enjoyed dancing along with me this whole time.”

We’re thrilled Kym’s loving motherhood. She certainly looks fabulous as she begins her new journey as a mom!