Another day, another photoshop fail? — Fans are roasting the Kardashian sisters after their latest ad for Calvin Klein‘s Fall 2018 underwear and jeans campaign appears to be photoshopped, at least that’s what fans are saying online! In the apparent altered snap, Kourtney, 38, Kim, 37, and Khloe Kardashian, 34, along with younger sisters Kendall, 22, and Kylie Jenner, 20, are pictured in black and white, standing in a grassy outdoor area. While many of the sisters are dressed in similar underwear and denim looks, fans couldn’t help but notice something off about Kourtney all the way back in the shot. The eldest Kardashian sister’s right arm, which is semi hidden behind Kim’s body, appears to be significantly smaller than her left. — And, fans won’t let the sisters forget it!

“What is wrong with @kourtneykardash arm?” one of many fans asked, adding, “Bad photoshop job perhaps?” Another observant fan wrote, “TINY ARM”. “Kourtneys arm!!! Just to make Kim look perfected,” another fan who put the blame on Kim, wrote. And, the comments continue to pour in. — “Omg!!! Kourtney’s arm is photoshopped so bad!!!!,” one IG user wrote. Meanwhile, others were just flat out confused, with some of the comments reading: “Can someone explain to me what’s going on with @kourtneykardash arm???” and “@kourtneykardash is ur arm ok there?”

The campaign was shot back in March 2018, when Khloe was still pregnant, eight months along to be exact. She poses alongside her sisters with her baby bump on full display. Khloe gave birth to her first child, a baby girl, True Thompson on April 12. The campaign also features a post-baby Kylie Jenner, who gave birth on February 1, about one month ahead of the shoot. She bares her midriff in multiple shots, where her post baby body looks amazing. 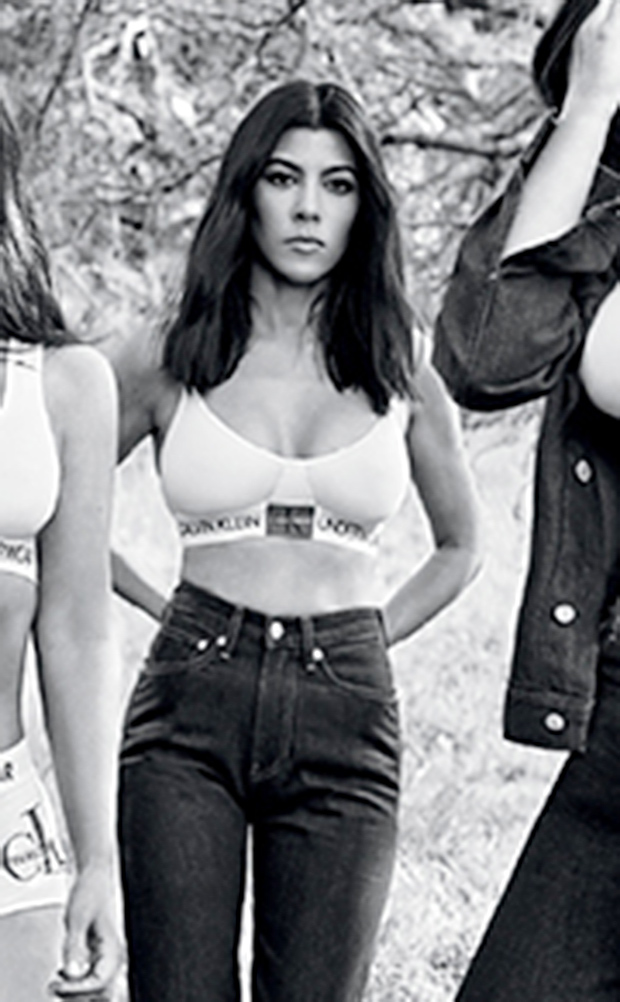 Calvin Klein later shared a behind the scenes video of the sisters, where a pregnant Khloe can be seen on a swing, with Kim running behind a tree, and well as the other sisters frolicking outdoors.

The photoshop backlash also comes after Kim came under fire for recent Snapchat videos in which she showed off her 119-pound body. In one video, Kendall expresses concern for her sister saying, she’s worried Kim doesn’t eat. — To which Kim acts ecstatic and thanks Kendall for the “compliment.”