Halloween came early this year, courtesy of Gigi Hadid. The model’s cover for LOVE magazine is the stuff of nightmares, ensuring that after one look, you’ll never sleep again.

Okay, it’s not that scary. However, Gigi Hadid’s contribution to LOVE’s 10th anniversary issue is the proper Donnie Darko sequel we deserve (and not the disappointing S. Darko that came out in 2009.) Gigi, 23, posed as “the golden hare in the golden hour,” donning a demonic bunny mask that covered her famous face. Judging by the surprised, confused and shocked look on the puppy in the picture, Gigi’s mask clearly did the job.

However, if you book Gigi for you publication’s cover, you don’t just slap a Halloween Adventure mask on her kisser and call it a day. LOVE also revealed an alternative cover, saying she “wreaks ritualistic mischief for her #LOVE20 cover by @mikaeljansson and @kegrand.” Gigi’s natural brunette tresses looked as primal and pagan as the fur wrapped around her neck (and that belt around her forehead? A bold choice.) In an odd bit of timing, Gigi’s LOVE cover dropped the same day that her on-again, off-again “love” Zayn Malik released his new song, “Too Much.” With lines about how love “must be and addiction / I wanted it all, didn’t expect it to fall,” is this song about Gigi?

Maybe? As for Gigi, she last appeared on LOVE’s cover in 2016, and she had a noteworthy appearance in the magazine’s 2017 Advent calendar. While putting her own spin on the calendar’s workout theme, she rocked a Tommy Hilfiger x Gigi Hadid sports bra and leggings, according to Harper’s Bazaar, but her most startling accessory was her armpit hair. Gigi went un-retouched and natural in the shoot, which was pretty cool. “I love seeing everyone else’s videos,” Gigi said about the series. “It’s celebratory of epic human beings and always pushes boundaries. The fashion circle is a family, so the Love Advent kind of feels like a Holiday Year Book in a way. Headmaster Grand style.” 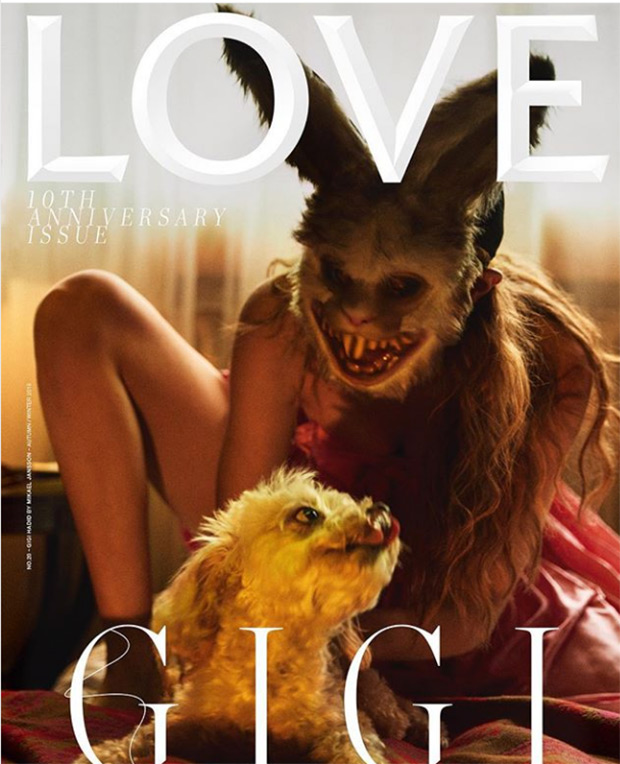 Gigi didn’t need a mask to turn heads at the CFDA Fashion awards on June 4. She walked the red carpet in a skintight Versace bodysuit that had all the colors of the rainbow (and more!) She matched the body-hugging outfit with a pair of red pumps, once again pushing the envelope. Gigi’s look was on the mind of fans when Dua Lipa, 22, tried to pull off the same look when leaving Late Night with Stephen Colbert a month later. While her Versace bodysuit is all the rage, don’t expect anyone to try to steal Gigi’s “Watership Down meets Evil Dead” look anytime soon.