After slamming Kim Kardashian for her slimmed-down figure, Tyson Beckford stood by his diss and continued to bash the reality star’s body on his Instagram story. See his latest shade here.

The Internet has a LOT to say about Kim Kardashian after she revealed her weight is down to 119 pounds, and Tyson Beckford is one person making his opinion clear: He’s NOT here for it. After going viral with his first diss of Kim’s new look, Tyson took to Instagram to continue throwing shade. “My opinion on women who do plastic surgery stays the same, not or me!” he wrote. “I personally don’t care for it! Done end of story!” He went on to add, “Always gonna pick Beyonce over anyone else.”

From there, he went on to repost various screenshots of people who showed him support for his comments, and on one, he added, “LOL Sorry if I like natural women.” Ouch! It’s no secret that Kim worked hard for her body, and she’s clearly proud of it, but the critics are coming in full-force on this one! Tyson originally dissed the reality star in the comments section of a post on The Shade Room, which featured a photo of her in skintight leggings and a cutout shirt, showing off her skinny figure.

“Sorry I don’t care for it personally,” he wrote. “She is not real, doctor f***ed up on her right hip.” Obviously, Tyson is insinuating that Kim had surgery to get her new body. Kim caught wind of the diss, though, and fired back, “Sis, we all know why you don’t care for it.” OH SNAP! 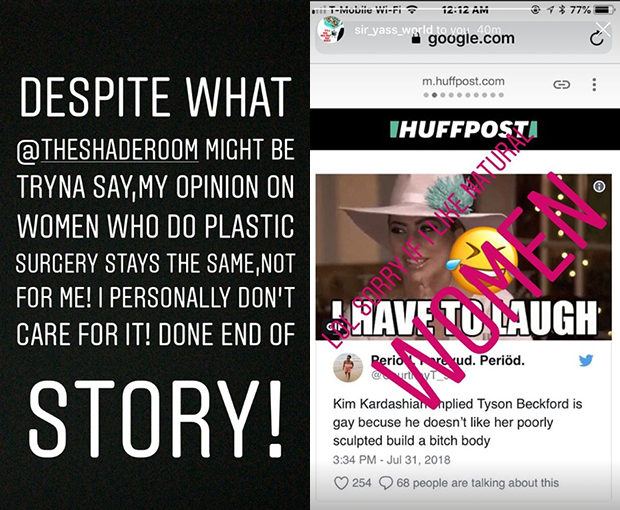 Kim first revealed her new weight on Instagram July 29 after her sisters, Kendall Jenner and Khloe Karashian, raved over how skinny she looked. However, many people feel that Kim is too thin and have slammed her for acting so excited over people calling her “anorexic” and “skinny.” As HollywoodLife EXCLUSIVELY reported, though, Kim is losing the weight with healthy diet and exercising, so as long as she feels good, who cares what anyone else says?!