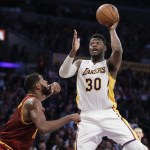 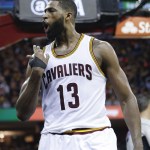 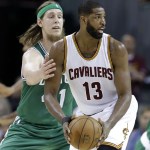 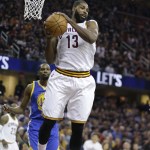 The on-court bad blood between Tristan Thompson and Draymond Green has spilled into a bar brawl. We’ve got details on how the two NBA stars will likely spar again when the new season starts.

Golden State Warriors star Draymond Green really knows how to push Cleveland Cavaliers star Tristan Thompson‘s buttons. He trash talked him during game one of the NBA finals and Tristan tried to punch him after getting ejected from a highly emotional game. His anger towards Draymond hasn’t stopped with the end of the 2018 NBA season, as Khloe Kardashian‘s baby daddy allegedly went after Dray at Delilah nightclub at a private party in LA following the 2018 ESPYS on July 18. With so much tension still in the air, Tristan will still be going hard against the 28-year-old once the 2018-19 season rolls around in October.

“Tristan is actually surprised that the incident with Draymond after the ESPYS is just now coming out. It happened but was such a quick moment that it was cleared up within minutes. Emotions have flared up on multiple occasions now between the two that Tristan really expects their feud to roll over to next season and he wouldn’t be surprised if they fought again,” a source close to number 13 tells HollywoodLife.com EXCLUSIVELY.

“There will be at least some technical fouls to worry about. Everyone should have their eyes glued to the games between Cleveland and Golden State next year because something is going to go down. It’s unfortunate because Draymond wants to clear the air but Tristan isn’t letting it go, so the heat is on for future scuffles,” our insider adds. With superstar LeBron James no longer on the Cavs squad, at least the feud between Tristan and Draymond should keep the Cavaliers/Warriors matchups somewhat interesting.

Drama went down between the two players during game one of the NBA playoffs in Oakland on May 31. It was already an emotional mess for the Cavs after in a tied 107-107 game with four seconds left, J.R. Smith got the ball and tried to run out the clock, thinking the Cavs were ahead by one. His epic error sent the game into overtime where Golden State completely rallied to decisively win. The Dubs players were getting cocky and trash talking the Cavs big time. Draymond totally got under Tristan’s skin, taunting him when he got ejected from the game after a technical foul with just two seconds on the clock. On his way off the court Tristan took a swing at Dray, who kept on laughing at him. Now with their latest run in, it proves their bad blood is there off the court as well.