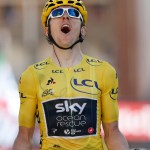 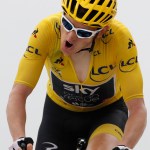 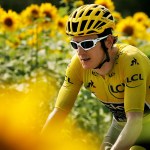 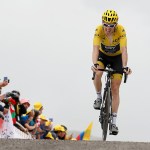 Heading into the 2018 Tour de France finale, Geraint Thomas has established an impressive lead. Before the race comes down to the final meters, get to know more about this history-making rider.

It looks like Chris Froome, 33, won’t be repeating as champ this year. His fellow Team Sky rider, Geraint Thomas, 32, has been killing it during the 2018 Tour de France, establishing a 2:05 lead over second-place Tom Dumoulin at the end of Stage 19 on July 27. With two more stages left to go, Geraint may just cruise his way to victory – and cycling immortality.

1. He’s already made history in this Tour de France. Geraint took the yellow jersey (basically, signifying he is in first place) at the end of Stage 11 and didn’t give it back. Over the following stages, Geraint built a comfortable lead, while pulling off a spectacular feat in Stage 12. Geraint conquered the Ale d’Huez, arguably the sports most famous climb, according to The Telegraph. In winning the 18-mile climb, Geraint became the first British rider to conquer the Alep d’Huez. He was also the first rider – of any nationality – to win on the Alpe d’Huez while wearing the yellow jersey (save for Lance Armstrong, who was stripped of all his accolades due to his doping.) He’s also the first man in 25 years to win back-to-back mountain stages.

2. Geraint began riding at a young age. Born in Birchgrove, Cardiff, the Wales-native began cycling with the Maindy Flyers Cycling Club when he was 10 years old, per Cycling News. He won his first World Championship gold medal in the scratch race at the junior track worlds in L.A. “I guess I started to really believe in myself after Los Angeles and that helped me win the junior Paris-Roubaix later that year,” he said. “I started to see cycling as a career rather than a hobby. Up to then we just had fun riding bikes and we all went down to the Maindy track and it was just like a youth club really.”

3. His high school has produced some major sports stars. Geraint graduated from Whitchurch High School in Cardiff, which also produced Gareth Bale, who won the Champions League four times. Plus, Sam Warburton, a former rugby player for the British & Irish Lions, also came from the school.

Alpe d’huez man!!! 😂🙈 Wow!! Yesterday was a dream come true, today is just insane. Lost for words. The boys were incredible today and the support is amazing!! Thanks for all your messages and support on the road, means a lot!!

4. Geraint has won some races but he hasn’t picked up a big one – yet. In 2017, Thomas won the first stage of the Tour de France, becoming the first Welshman to wear the yellow jersey. He was doing well but broke his collarbone in Stage 9, forcing him to withdraw from the race. With just two stages left and more than two minutes ahead of everyone else, his win is viewed as a formality. This would be his first Grand Tour victory. He’s won such stage races including the 2014 Bayern-Rundfahrt, the 2016 Paris-Nice and the 2017 Tour of the Alps.

5. He’s married! Thomas met Sara Elen Thomas through a mutual friend, and the two tied the knot in 2015. “I can’t get over how massive the whole thing is,” she said about the Tour de France in 2013, per Wales Online. “They really appreciate what the cyclists do and everyone knows who they are. It is quite a refreshing change from the UK where they don’t seem to get a lot of respect for what they do.” Well, Geraint is going to get a lot of respect now.